For those of you who have followed the blog for the last few years (or looked at my list of recipes), you have probably noticed that I’m not the type of homebrewer who puts a lot of effort into refining a recipe with repeated brewings. I enjoy making a huge range of styles, and when I rebrew the same one it is usually with the intent of trying out a new ingredient or technique. However, over the next year I am going to be spending quite a bit of time honing recipes for Modern Times Beer. Rather than deciding which of these will be year-round and which will be seasonal in advance, Jacob and I are brewing the sorts of beers we enjoy drinking and letting the flavors, and eventually consumer reaction make that determination for us. 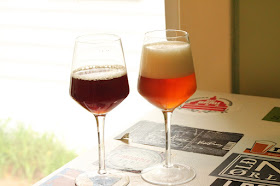 This batch of amber IPA is the first rebrew of a batch I initially dubbed Nelson Nectar (although that name will obviously change). There are many well respected brewers who say that when refining a recipe you should only tweak one variable (e.g., ingredient, time, temperature) between each batch. I think this is good advice, but only once you get close to your intended target. When you first brew a recipe you may miss on several areas, and it is not worth taking four or five batches to correct them all.

While we really liked the result of the first batch, the color was not quite dark enough for a beer we'd like to describe as amber. To remedy this I swapped out the 2.5 L French Vienna malt, for 3.5 L German Vienna malt. I also almost tripled the amount of pale chocolate malt. Despite the ProMash estimate of 14.5 SRM, the wort almost looked brown. If that holds true into the finished beer I will back-off on the pale chocolate on the next batch.

Although I prefer my hoppy beers on the thin/crisp side, Jacob wanted to add a bit more body to this beer (without making it sweet). To achieve this, I eliminated the small amount of completely fermentable table sugar that I had added to the first batch to increase the percentage of dextrins in the wort. Higher efficiency from my recently tightened grain mill replaced the lost gravity. 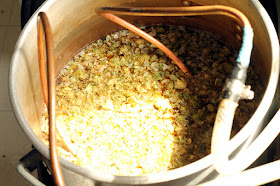 The first batch had a firm/smooth bitterness, but I wanted more. Several friends estimated it at closer to 50 IBUs, rather than the 80 I expected from 8 ml of hop extract. For this batch I increased that to 10 ml, and included a mid-boil addition of Simcoe. When a beer has a big hop aroma that doesn’t match the balance of bitterness to sweetness, the beer can taste a bit disconnected.

Jacob and I are planning on producing several hoppy beers (since we both love them), but we want some range in the hop aromatics displayed by the lineup. We decided to make this the “dank” beer, so we swapped Ahtanum for Columbus in the aroma hopping (keeping the Nelson and Simcoe). The current plan is for a wheat beer with fruity hops (like the one I posted about last week), a rye IPA with some spicy hops (like Sterling), and a hoppy pale ale that is classic American citrus and pine (Cascade et al.). On a commercial scale this goal will be complicated by the current scarcity of some cutting-edge varieties caused by the booming craft beer market, but before we know what we can actually get contracts for I’ll be brewing with whatever I can get my hands on. Modern Times won’t be all about hoppy beers though, I recently brewed a test-batch of Berliner weisse that has a few twists of its own. 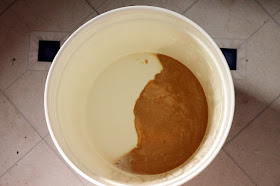 Added 10 ml of hop extract (two HopShots) after the first 5 minutes of the boil.

Added half the 0 min hops at flameout, saved the rest for 15 minutes into the hop stand (when the wort had already cooled to 180 F). 30 minute rest total before I started chilling. Chilled to 67 F using a combo of ground water, and recirculating ice water.

Harvested 1/2 cup of dense slurry from the 1.045 American Wheat. Racked beer onto slurry, then oxygenated for 40 seconds. Ended up with 5 gallons of 1.081 wort. Left at 62 F to begin fermenting. Topped up couple hours with .5 gallons of distilled water to bring the gravity down and the volume up. Start of fermentation by 16 hours.

5/15/12 Boosted temperature to 64 F ambient to ensure a strong fermentation.

5/19/12 Raised temperature to 68 F to make sure it finishes out completely.

5/28/12 Kegged with the dry hops. Down to 1.016 (78% AA, 7.6% ABV). Left at room temperature until a spot opens up in the kegerator. Color might be a shade or two darker than I was aiming for. Maybe back down to 3 oz of pale chocolate next time? Tastes and smells really hoppy even before the dry hops.

7/11/2 Color and flavor ended up about right, good color, nice aromatics. It could have been more DANK, but it was still really good.