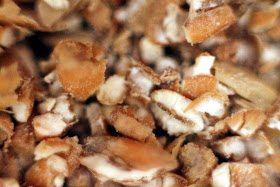 I've brewed a couple of hoppy wheat beers in the past, but all of them have been variations on hefe weizen. I had never made an American wheat beer in the mold of Three Floyds Gumballhead or Southern Tier Hop Sun, that is to say fermented with a clean ale yeast.

Wheat doesn't provide much of a distinct flavor of its own; most of the character of German and Belgian wheat beers is from esters and phenols produced by their signature yeast strains. I wanted this beer to be hoppy, but with a profile that helps differentiate it from an extra pale ale. I decided to add varieties that contribute citrus and tropical notes. I know both Amarillo and Citra well, and they seemed like a good combination for the late boil addition. For the dry hop I incorporated Calypso, a new-ish variety I had never used before. Its descriptors include pear and lemon/lime, hopefully perfect for a refreshing summer wheat beer.

I have been happy with the results of using HopShots, hop extract, to bitter a few recent batches (like my Nelson Nectar IPA), but I perceive the bitterness to be softer than the manufacturer indicates. As a result, for this batch I targeted ~20% more IBUs than I would have with a standard bittering hop addition. I'm not sure if the IBUs are actually lower than suggested, or if it is just a perception resulting from smooth bitterness. I also find low-cohumulone varieties like Magnum provide less perceived bitterness compared to high-cohumulone varieties like Chinook. Cohumulone along with humulone, and adhumulone comprise the alpha acids that when isomerized are responsible for hop bitterness; the Hop Variety Handbook lists ranges for the amount of cohumulone in most hop varieties.

The hoppy wheat spent the last week dry hopping in the keg, cold and on CO2 pressure, while I was out of town. It was nice to return after a week that included 1,700 miles of driving (Audrey's graduation, Cape Cod, Hill Farmstead 2nd Anniversary Party etc.) to a bright, refreshing, and wonderfully cold beer.

Pitched a decanted .75 l starter from the stir-plate that had been made 36 hours earlier. Added .5 gallons of cold distilled water to dilute and chill it down a few degrees.

Allowed to warm slightly to 68 F after a few days to ensure a complete fermentation.

6/28/12 Turned out alright. Not sure I'm a big fan of the character from the Calypso though. Next time, stick with Amarillo/Citra, and boost the mash temperature slightly.