Jacob just showed me the first concept label art for Modern Times. Sadly I can't post them yet, but what I can share is tasting notes from the most recent test batch. We aren't sure whether a hoppy American wheat will be a summer-seasonal or a year-round, but it will be in the lineup somewhere.

This is my first batch, with the goal being a citrusy/fruity leaning hop character in a sessionable beer. In addition to two of my favorites, Citra and Amarillo, I used Calypso for the first time. Much like my first time using Galaxy in a double IPA, my first impression of Calypso isn't highly positive. Although I have enjoyed samples of commercial beers hopped with both of these new-ish varieties, in my own brewing I've used whole cones that probably weren't in perfect shape.

For once Jacob was actually in DC to taste this batch when he visited me a couple weeks ago. In addition to getting to drink a bunch of great beer together (homebrew and otherwise), we also started getting down to some serious business like estimating the hop contracts we'll need for the first year. We're also both planning to go to GABF this year (my first time), so let me know if you're going to be headed to Colorado! 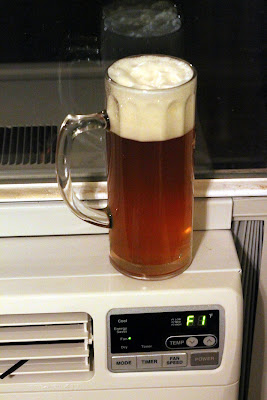 Appearance – Pale yellow, although there are some golden tones that make it darker than the common straw-yellow color of many American wheat beers (although it isn't nearly as amber as the picture appears). The thick white head is rocky and sticky (lots of hops and plenty of wheat make a great combination when it comes to foam stability). The body is a bit hazy, but not muddy or murky.

Smell – Big fruity-hoppy nose, but not as much citrus as I intended. This beer has never had quite the big orange nose that I wanted it to. There is a slight resiny-complex hoppiness behind the fruit that plays a good counterpoint.

Taste – The hop flavor isn’t as bright and fresh as the aroma. It has an overripe pear component that I am assuming is from the Calypso. The balance is a bit drier than I would prefer. Overall the fermentation character is pleasantly clean, and the malt character is lightly bready. The moderate hop bitterness lingers for a few seconds after each sip.

Mouthfeel – Nice medium-low carbonation, could be a bit higher, but I like it as is. Slightly tannic.

Drinkability & Notes – Not a bad first attempt at a hoppy American wheat, but I still have quite a bit of work to do. Jacob shipped me the Calypso, and they may not have been in the best shape after a warm week traveling cross-country without being vacuum-packed. I think the next iteration of this recipe will be all Citra and Amarillo. Then maybe I’ll see if we want to work in something Southern Hemisphere like Riwaka or Rakau on subsequent batches.
The Mad Fermentationist (Mike) at 10:17 PM