If there is one question that I get asked more than any other, it is some variation on "Why don't you open a brewery?" While I love the idea of brewing professionally, I also like having a stable salary, health insurance, and a comfortable life. What I enjoy doing is brewing, not running a brewery. When I first started working for the government, I would occasionally trawl ProBrewer.com classifieds looking for entry level positions. After sending a few dozen resumes and getting a couple interviews, I was offered a job by Flying Dog. After considering their offer to come on as a cellarman for $10 an hour, I decided I was happy being a homebrewer. Over the five years since then I haven’t applied to work for a brewery, or even seriously thought about changing careers.

Over the last couple years I've received a couple offers to work for upstart breweries, but none of them have been enough to change my mind. I’m always happy to talk to brewers and lend my opinion informally when someone asks. So when Jacob McKean sent me an email a few months ago saying he was opening a brewery, I was happy to hear what he was up to. He and I had swapped beers a couple years earlier. I couldn't say no to exchanging a six-pack of my homebrew for bottles from Alpine, Lost Abbey, and Alesmith. Until he left to start filing paperwork, Jacob was employed as Communications Specialist at Stone Brewing. 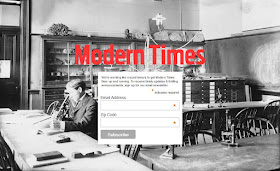 We talked on the phone for an hour about his plans for Modern Times Beer. He offered me a job as a brewer if I was willing to relocate to San Diego. I was reluctant. I have a comfortable life. I don’t mind my job, I like my friends, my house is full of carboys and barrels, and my girlfriend will finally be returning to DC in a couple months after two years at grad school. "No problem.” he said, “how about being a consultant?" Being paid to travel to Southern California a few weeks every year to brew beer at a cool brewery, how could I refuse that?

The more I have talked to Jacob since then, the more I'm convinced that I waited for the right opportunity. Whether it is the impassioned op-ed he wrote for BeerPulse.com a few weeks ago, his emphasis on putting quality first, his business sense, or his spot-on analysis of the homebrew I’ve sent him. Jacob’s plan is to open with a 30 bbl brew house, canning line, and tasting room (including a pilot system). He is looking to places like Surly Brewing in terms of the business plan.Of course all of this depends on a much money he can raise, a process that is just now beginning in earnest.

As I wrap up the research for my book on American sour beers, the more I am cognizant of the limitations imposed by my homebrewing batch sizes. Especially the ways they constrict my blending options and ability to introduce controlled variations (different microbes, barrels, fruits, etc.). Helping develop a decent sized commercial barrel aging program is the next step logical step in this craft for me. In addition to working on this aspect of Modern Times, I will be helping to develop recipes for clean beers. I will also have a hand in writing for the brewery’s blog/website.

Jacob and I have been kicking recipe ideas around and I've started to brew some test batches (like the India Amber Ale) that will end up in the hands of some potential investors. Jacob is still scouting locations. While San Diego already has a dense local beer scene, most of the breweries are well outside the city. His plan is to locate the brewery within the city's limits. Jacob is also vetting potential brewmasters. Hopefully the person he hires will be able to juggle the demands of making consistently excellent year round beers, with all of the fun stuff I’ll be pitching.

If all goes well, then the first Modern Times beers should be available in mid-2013. As for a full time role at the brewery, we'll see where consulting leads, but anything like that would still be years away.

I’ll certainly be posting the occasional update here, especially when I brew test batches (like the coffee oatmeal stout I brewed yesterday), but if you want to stay completely up-to-date you should follow Modern Times on Twitter or Facebook. Cheers, and thanks for all of the encouragement over the last five years!
The Mad Fermentationist (Mike) at 8:23 PM