One of my favorite flavors in a beer is the right mix of sour beer and dry hops. I’ve only done it a couple times in the past, but the results have all been great. In particular the combination of citrusy hop aromatics with acidity can be terrific, but is only available from a couple breweries (New Belgium’s Le Terroir being the most prominently). The key is waiting until the beer is ready to bottle before giving a couple weeks for the hops to infuse. Add the hops too early and you’ll end up with aromatics reminiscent of an old IPA by the time the beer is ready to drink. In this case Nathan and I blasted five gallons of the base beer with 4 oz of Amarillo pellets for three weeks in a carboy right before bottling.

This first pull from our apple brandy barrel solera is already pushing the high end of my preference for acetic acid (vinegar). The key to reducing acetic acid is limiting the amount of oxygen (from the air) that comes in contact with the aging beer. Hopefully we will be able to control the production for subsequent fills by topping off to reduce head space, controlling the temperature, and using a hard bung when fermentation is complete. 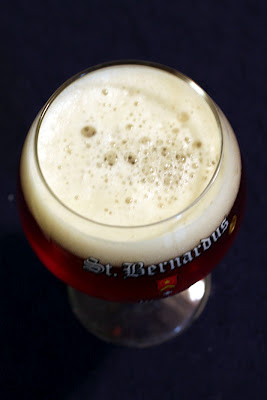 Appearance – Amber in the glass, but burnt orange when held to a light. It has a decent white head and even leaves some lacing, which is better than most sour beers.

Smell – Big citrusy Amarillo aromatics, still pretty fresh. Tropical. Has a bit of dankness that I don’t normally get with this fruity hop. There are hints of the sourness in the aroma, some of the signature fruity Brett esters. I also get some apple, maybe from the barrel (I get apple cider vinegar in the nose of the plain version).

Taste – Sharp lactic sourness, with just a little acetic burn in the finish. The hop character takes a primary role as it did in the nose. The Amarillo covers up some of the more complex notes from the barrel and microbes, but I really like the combination of citrusy (pineapple and lemon?) hops with the sharpness.

Mouthfeel – Relatively light mouthfeel for a strong beer, but it does not taste thin despite finishing at 1.004. Restrained carbonation, which is about right for a bigish sour beer.

Drinkability & Notes – I think the dry hops actually cut through the sourness of the base beer slightly. After a few months in this bottle the hops are already starting to fade, but it is still a solid beer. I’m trying to work through the bottles I have left before they oxidize completely.
The Mad Fermentationist (Mike) at 10:15 PM