This bottle came from the five gallons of wort that Nathan and I took home from our brew day with Ryan Michaels and Gerard Olson at McKenzie’s Brew House in late 2010. The rest of the batch of Irma was sold at the brew pub as Irma (stainless steel fermented) and Irma Extra (soured, barrel aged). In addition to the White Labs Saison II pitched at the brewery, we added the dregs from a couple of the spectacular sour beers that we were given from McKenzie’s cellar.

Since then Gerard has opened up his own brewpub, Forest & Main in Ambler, PA, where he is brewing a wide variety of American saisons. For example, Saison a l'Ancienne: "Brewed with barley grown and malted in Southeastern Pennsylvania by our own maltster, fermented partially with wild indigenous yeasts, this farmhouse ale reflects our regional terroir more than any beer currently on the market." Hard to say no to that.

I think the best Belgian beers are the ones that have flavors that you can’t quite identify, even when you brewed the beer. Irma was a simple recipe, but the aroma and flavor have notes of wood, spice, and other flavors that I can’t put my finger on. A combination of malt, hops, and yeast (cultured and otherwise) can give a wide range of surprising flavors given enough time. 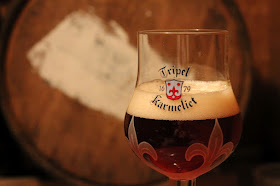 Appearance – In my wide Tripel Karmeliet tulip the beer appears dark amber, almost red. Clear, like most sour beers. The thin white head lasts for a few minutes, but is quickly reduced to a thin wispy covering.

Smell – Lambic funk, damp basement, boozy oak, cooked apples, and slight floral/perfume. It is a soft aroma, but with lots of complexity.

Taste – The flavor has many of the same elements as the aroma, but the Munich malt adds a great bready malt flavor in addition. The beer is dry, but the saison yeast we used for primary fermentation prevents it from being thin. It is amazing how much the beer tastes like it was aged in an apple brandy barrel even though it never touched wood. As it warms I even get a hint of licorice.

Mouthfeel – Moderate carbonation. Could be a couple notches higher, especially if we really wanted to call this one a saison. There is some body there, but not much.

Drinkability & Notes – Terrific beer, lots of complexity, but not aggressively sour/funky/dry or otherwise difficult to drink. I would put this up against the better bottles of Fantôme's highly variable saisons (which have been too few and far between lately). Sad I haven’t had a chance to try the versions fermented at the brewery, but the reviews on BeerAdvocate have been pretty positive. It would be interesting to see how ours compares, hopefully I can find an excuse to get back to Philly soon (I need to make it to Forest & Main as well).
The Mad Fermentationist (Mike) at 7:35 PM