For many brewers the basic procedure for every recipe is the same: grind the grain, single infusion mash, sparge (or not), boil the runnings with hops, chill, pitch, ferment, package. Sure there are subtle variations to temperatures and times, but essentially the same process can yield either an Imperial Stout or a Pilsner just by altering the malts/grains/hops/yeast. I still enjoy my “standard” brew days, but after brewing nearly 200 batches over the last seven years, it is more fun when I get to try a new technique. 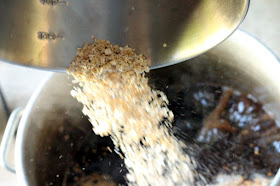 One of my goals is to brew a moderate gravity stout that drinks with the thick body of an Imperial Stout. Rather than simply mashing really hot, or loading up on crystal malt, I was alerted to another option, adding quick oats to the wort near the end of the boil. I have been told that The Alchemist has used this method to add a thick body to some of their beers without increasing sweetness. Oats contain beta glucans (a type of soluble fiber) which are responsible for the smooth viscosity they add to oatmeal stouts.

I know, one of the first things that new brewers are taught is to avoid steeping grains that contain starch. The common thinking goes that adding starch to a beer is just asking for trouble since it is unfermentable by brewer’s yeast, making it an invitation to spoilage microbes. The problem with this line of thinking is that so are dextrins, which add body to beers. In fact, dextrins are a much easier to ferment source of carbon for common spoilage microbes like Brettanomyces and Lactobacillus, which usually lack the enzymes required to tackle (hydrolyze) longer chain carbohydrates like starch. Since flaked oats do not contain a husk, there is also no major concern about tannins (as there would be adding malted barley to the boil). 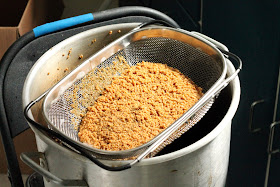 After sprinkling the half pound of quick oats into the boiling wort, I let them sit in there through chilling. I strained them out of the cool wort, along with the hops, when I transferred to the fermentor. Rather than the thick gloppy mess I expected, each flake had contracted into a neat little pellet. Hopefully this means that the starches and beta glucans that usually provide the thick texture in a bowl of oatmeal are suspended in the wort. Fermentation exhibited a dense krausen, but the Fuller’s strain I pitched is known for that as well. I was happy that I used an eight gallon wine bucket for primary fermentation, rather than one of the six gallon Better Bottles I have used in the past. It is nice not to worry about attaching a blow-off tube.

For the rest of the recipe I drew inspiration from the Munich Porter that Nate and I brewed a couple years ago. It relied on dark grains that were lighter than the usually 500+ L versions of Roasted Barley and Black Patent. Our porter was good, but the roast character was too mellow/smooth with only a half pound each of Briess Roasted Barley and Chocolate malt. So for this batch I doubled the roasted barley and edged up the chocolate malt. Hopefully the higher amounts will produce a smooth cocoa and coffee roast, without a burnt/acrid edge. If the roast still isn't potent enough, I'll have to go to a combination of lighter and darker roasted grains to get the effect I am looking for. 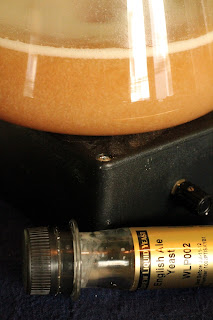 I will be steeping a few ounces of roasted coffee beans in the beer for about 24 hours prior to kegging. This is a technique I’ve used a couple times in the past (like the Coffee, Chocolate, Maple, Imperial Oatmeal Stout) because it delivers a nice aromatic character without getting bitter or harsh in the same way that hot-side additions sometimes do. I also find that its flavor is more persistent than coffee additions cold steeped in water, which start to fade after just a few weeks.

After the India Amber Ale, this is the second test batch I’ve brewed for Modern Times. Although I overshot the gravity, I’d like to bring it down closer to 5% ABV mark in future iterations.

Added the Quaker quick oats for the last 10 minutes of the boil. Chilled to 66, strained out the oats/hops, pitched a .75 l starter of yeast, and shook to aerate. Overshot the gravity slightly.

"I've heard good things about adding quick oats for the last 10 minutes of the boil" - Re: Alchemist

Fermenting well by 18 hours. At ~62 F ambient for the first week.

4/15/12 Temperature warming close to 70 F, so I roused the yeast by twisting the bucket back and forth for 30 seconds to ensure it eliminates any remaining diacetyl.

4/22/12 Only got down to 1.019, guess that's the oats. Added 2 oz of coarsely crushed Mocha Java Blend coffee beans in a weighted stocking. Kegged 24 hours later.

5/10/12 Reasonably happy with the results of this first try, but the oats didn't add the creaminess I was looking for. I'll be moving them to the mash and boosting them in the next batch.

6/9/12 Brewed a second iteration of this recipe.
The Mad Fermentationist (Mike) at 7:25 PM