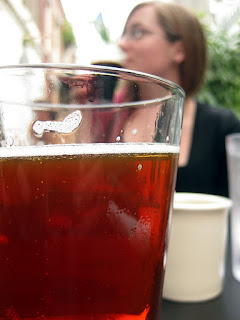 There are a handful of American cities that are regarded as hubs for good beer: I'd put Portland, San Diego, and Philadelphia all in that first tier. These days there are plenty of other places that have a few cool breweries, or a bunch of good bars, but there are still a lot of cities that are not known for their beer scene at all. New Orleans was one of those cities in my mind, sure they have Abita (brewers of a number of most mediocre beers) nearby, but I think of it as a town whose drinking scene is centered around college students slamming florescent colored hurricanes and hand grenades. I was expecting great food, so if I wasn't able to get a decent beer I'd survive (see our trip to Spain).

Before Audrey and I flew down for the extra-long weekend over New Years, I did a bit of research. There were a few more places than I expected in the BeerAdvocate database, and got some good suggestions from replies on Facebook and Twitter. However it is always hard to tell just how good places are when there isn't a huge amount of competition. 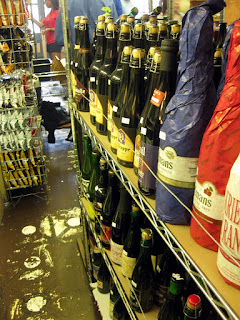 We stayed near the French Quarter and Frenchmen Street at a small-cool-eclectic-odd bed and breakfast. The first day we walked around to get a feel for the neighborhood. The next day we took the St. Charles St. streetcar through the Garden District to Casamento's (delicious oyster loaf and stew, but painfully inattentive service).

After lunch we walked to NOLA Brewing, a smallish production brewery that opened a few years ago. We arrived in time for the weekly Friday tour. It turned out the tour consisted of drinking free beer and standing around the brewery. We only stuck around long enough to try one beer each before the line stretched out the door and around the corner, and we decided to move on. However, over our six days in town I got to try most of their beers with the Irish Channel Stout (more bitter and roasted than expected) being the winner.

From NOLA we headed to what I had been told was the best bottle shop in town, Stein's Market and Deli. Not a big place, but it was funny to see Cantillon and Fantôme in abundance, breweries that have become rare on the East Coast (and at prices I don't remember seeing in a couple years - $12.50 for Fantôme Saison?!). Other then a few local beers, they didn't carry much I can't find in DC besides a few Southern breweries like Sweetwater, St. Arnold, and Lazy Magnolia. Before we left we also grabbed a couple knishes and a pickle to snack on as we continued our walk. 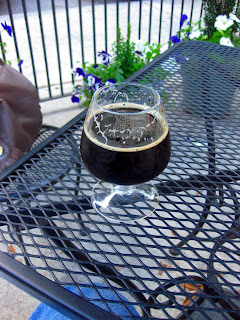 With a few bottles in tow we continued east to The Avenue Pub, where we sat in their back courtyard. Another relatively new operation, it has a beer list that could stand up against many of the great beer bars in beer-cities. I had a glass of 3 Fonteinen Zwet.be (a funky porter) and Audrey had a glass of BFM Bon Chien (both were in good shape, although I was hoping for more sourness in the 3F). They had a number of local beers as well, but we figured we could find those at other bars or restaurants.

In general I was impressed that most places we went into had at least a couple local beers from places like Bayou Teche, Tin Roof, NOLA, and Abita. In particular we enjoyed d.b.a (live music and 30 taps), Green Goddess (brûléed, apple stuffed, French toast, and a smoked beer from Bayou Teche), Boucherie (best corned beef sandwich of my life, and a glass of Du Ciel Route Des Épices), and Cochon (braised pork cheeks, house cured meats and a Tin Roof Voodoo Bengal S.P.A). I think the single best thing we had to eat on the trip were the barbecued shrimp at Mr. B's Bistro, particularly the sauce which tasted like reduced shrimp stock, butter, and spices (the Abita Winter I had with it was the best beer I've had from them). I can't remember a single bad thing we ate on the entire trip, even the beignets at Cafe du Monde were excellent despite it being a tourist trap. 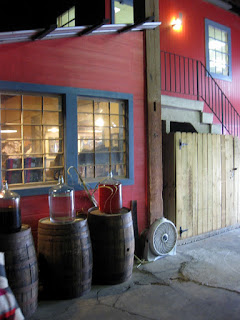 Taking a break from eating (not to mention museums, a swamp tour, and shopping) we headed to the Old New Orleans Rum distillery for a tour (luckily the $10 includes both a tour-guide and samples). The tour started out with a cocktail (a not-too-sweet tea with Cajun spiced rum), and then proceeded into the history of the distillery (founded in 1995) and of rum production in general. The molasses is mixed with water and then open-fermented in a large vat by a few pounds of yeast (the taste of the wash was a bit sour, but otherwise inoffensive - sanitation isn't that important when you are going to distill). Once fermentation is complete the distillation begins in a pot still and then proceeds to a column still (repossessed from a French perfume maker). The bulk of their rum is sold unaged, but some is aged in used bourbon barrels for three years (some of the barrels are subsequently sold to a brewery that uses them to age their smoked porter). At the end of the tour we got small samples of all four of their products (including the 10 year aged version, barrels of which survived hurricane Katrina up in the rafters, above the eight feet of flooding they experienced - see the color change in the wood above the fan?). 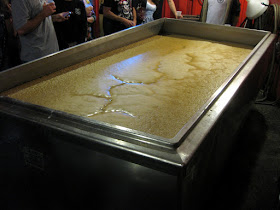 On our last night we met up with Sal, a homebrewer from across lake Pontchartrain who had emailed me a couple of time for advice. He suggested El Gato Negro for some fresh squeezed margaritas, which were excellent (I went with the pineapple-cilantro, Audrey had the satsuma). We talked about the beer scene and the local culture in general and swapped a couple homebrews. Sadly, I haven't had a chance to open either of the beers he gave me yet since I have been fighting off a cold for the last week. For the flight back I grabbed a muffaletta sandwich at Central Grocery (we'd tried to go around lunch on a previous day, but baulked at the line). Best dinner on a plane I've ever had.

Good beer, great food, fun trip. Not sure where we'll be headed next, but I need a trip to Belgium at some point (maybe a reward once the book is finally done...).
The Mad Fermentationist (Mike) at 8:18 PM