Rye is a weird grain. It has a flavor that some people call "spicy" but I've never thought it made a beer taste like it had been spiced (unless you also add caraway, like our Kvass). To me rye malt adds more of a rustic earthy grain flavor that is hard to articulate. On previous batches I'd stuck between 15-25% (in Denny's RIPA, and Brett'd Saison), but brewing with my friend Scott we went all the way up to 45% in our Cherry Wood Smoked Roggenbier. Brewing a collaborative recipe is a good way to try something out of your comfort zone, something you would not brew if the choice was entirely up to you. Sometimes it yields a beer you love (as it has on several previous batches with Scott), while other times it gives you a data point for future experiments. 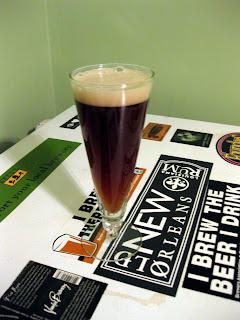 Appearance – Ruddy brown, with the rye adding a thick almost muddy haze despite several weeks of cold conditioning. Head pours a finger thick, but deflates rather quickly. Looks similar to a dunkle, but I would like it to be a bit lighter on the haze.

Smell – Some ctrusy hops, sweet cigarette smoke, sulfury yeast. Nice complex aroma, the smoke is lighter and melds better with the yeast and hops than other smoked malts I have used. It is a nice level of smoke for complexity, but some people might want more.

Taste – Firm bitterness, lingering smoke, maltiness, a bit muddled. The rye adds an indistinct earthy malt character that gets in the way of the other flavors. I think I would back down on the rye to 25% if I brewed it again (swapping in some wheat malt probably).

Mouthfeel – Creamier and almost syrupy compared to what I expect in a beer like this (the rye's beta glucans are to credit/blame). Solid carbonation, I'm sure purists would want it spritzy, but in a higher bitterness example like this I think too much carbonation would be grating.

Drinkability & Notes – Solid beer, but it just doesn't have the balance I want. Baking down on the rye, and upping the smoke slightly would be the way to go if I brewed it again. One of the problems with home-smoked malt is that inconsistency compared to commercially smoked versions, but the soft cherry wood smoke was the right choice by Scott for this beer.