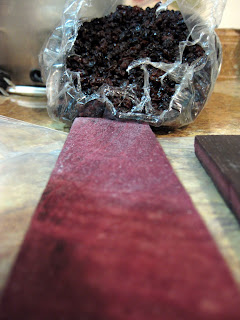 I like the idea of seasonal beers that are always similar, but never the same. For the last four falls a few friends and I have brewed dark funky saisons with dried fruit. Each year we keep the basic concept the same, but change the ingredients and methods to suit the dried fruit we select.

After previously using raisins, dates, and figs we decided that currants were the next logical choice. Dried currants have a flavor similar to raisins, but it is slightly more acidic with winey complexities. While there are "cassis" lambics flavored with fresh (or juiced) currants, I think the best example of their use is dried in Russian River's Consecration. Recently I went to a tasting at a friend's house where we opened five bottlings, and while each one was interesting in its own way the 001 had the perfect balance of acidity, Cabernet Sauvignon, tobacco, and dark fruit (too bad it was my last bottle).

For the malt bill of this year's dark saison we used a base of Vienna to give it more bready/toasty flavors than previous batches. Rather than getting all of the dark color from dehusked roasted malts in the mash, I made a cold extraction with roasted barley first processed in coffee grinder. I mixed a half pound with 20 ounces of water, although I probably would use a quart the next time. After sitting overnight at room temperature I strained it through a tea strainer (my initial attempt with a paper coffee filter quickly became clogged). We added the resulting 10 ounces of syrupy jet-black extract to the kettle at the start of the boil. 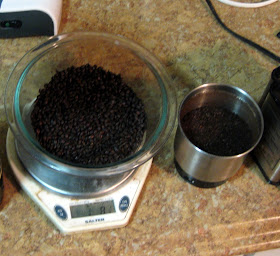 Fermentation was a mix of saison strains and Bretts. This was my first time using White Labs WLP670 American Farmhouse which includes a mutated version of Brett bruxellensis from The Lost Abbey. I missed the initial release last summer, but Brandon (who writes the excellent sour beer blog Embrace the Funk) was kind enough to send me a slurry he had saved (the strain will be available again as a year round release for 2012). Alex and I also pitched Wyeast Brett bruxellensis and Farmhouse Ale to complete the fermentation team. For once we did not add bacteria, so while this beer will be funky it will not have the sourness that the previous batches did.

For the first three dark saisons in this series we pureed the dried fruit and added it to the end of the boil, but this time Alex and I decided to wait until secondary to preserve more of its flavor. As these currants were coated in oil (from the feel of them) I gave them a quick rinse in Star-San followed by filtered water to remove the head destroying lipids.

For oak a fellow homebrewer (Tom, who also hooked me up with a bottle of Surly Five) sent me a few slices of an oak stave that had been in a red wine for some time. Even the smallest one, at 1.75 oz, was a bit more than I usually add, but since it had already had a good deal of its character extracted and had relatively low surface area I decided to risk over-oaking. I am also planning on adding some citrus zest when the beer is closer to bottling, but that will depend on the flavor. 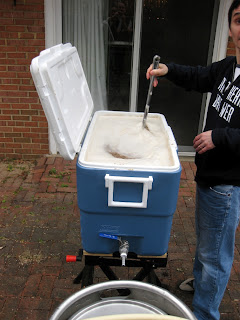 We are starting to run out of dried fruits to use in dark saisons, so if anyone has a suggestion please post a comment. I think maybe even prunes would be a good choice...? 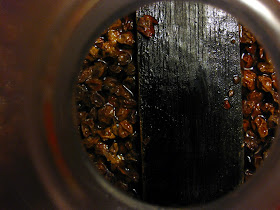 Used spring water for the mash and sparge.

One week earlier had made a cold extraction with the roasted barley and one pint of water. Filtered after 18 hours at room temperature, rinsed with a few more ounces, and saved in the fridge. Added to the start of the boil.

Chilled to 70 F. Aerated with ~45 seconds of pure O2. Pitched my five gallons with 375 ml of loose slurry from the acid malt saison, 75 ml of dense slurry from WLP670 American Farmhouse, and half a package of Wyeast Brett B.

Good fermentation by the next morning at 64 F ambient in a large bucket fermentor. Never produced much krausen. Left the lid on lightly to mimic the low pressure of open fermentation.

2/7/12 Already had enough oak character (tannins especially), racked off of currants and oak stave. It would have been nice to let the currants ferment longer, but at 6 weeks they should have given up most of their flavor.

2/6/13 Tasting notes, nice contribution from the currants and oak. The cold steeping worked to prevent an acrid flavor.
The Mad Fermentationist (Mike) at 8:23 PM