Over the Christmas weekend I had time for my annual tasting of the Courage Russian Imperial Stout clone that James and I brewed four and a half years ago. The timing couldn't have been better since a few days prior I got my first taste of the (newly re-resurrected) original which is now being brewed by Wells and Young. The commercial version did not have any Brett funk that mine does, but it did have a firm charcoal roasted bitterness from the heavy-handed use of black patent. It was interesting to taste a beer at such a young age that is built for aging (the bottle we had was brewed this summer).

It seems like so few of the American brewed Imperial Stouts are designed for graceful aging. The high level of sweetness in many examples (about 1.060 in the case of 3 Floyds Dark Lord) requires massive hopping to counter. The problem is that as the bitterness fades the beer loses that balance and ends up sugary sweet. Alternatively, some versions have gotten so strong that they need to age for a couple years before approaching drinkable. The bottle of The Bruery's 19% ABV Black Tuesday I had at the same tasting was so boozy that I couldn't taste anything else. Does anyone really want an aged beer that has alcohol of sugar as the primary flavor? I am not advocating 7% ABV Imperial stouts that finish at 1.005, but you are not going to get beer drinkers coming back to beers that are undrinkable in excess of 2 oz. 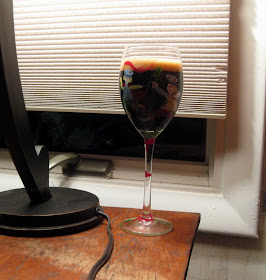 I'm hoping to pick up a few bottles of the Courage to store away for a few years to see if this newest incarnation has the agability of its predecessors. I may also have to rebrew my recipe without the Brett to see how close it is.

Smell – Has more of basement Brett funk than I remember in previous years, plenty of Bretty wet hay. Nice coffee roast character as well as dark fruit (prunes?). Still not showing its age negatively, although it is interesting that the funk seems to be increasing despite the lack of live Brett.

Taste – The flavor has less funk than the nose, with more cocoa and coffee. There is some vanillin oak as well. The bitterness (hop and roast) is mostly gone, leaving even a 1.020 beer sweetish, but the alcohol is still enough to balance.

Mouthfeel – More carbonation than I like in a big dark beer, but it is stable (at this point I don't think it will change). The body is moderate for an RIS, it is amazing how thick some of the American versions of the style are.

Drinkability & Notes – As always this beer is a nice Christmas treat when I visit my parents for the holidays. Almost halfway to my goal of hanging onto at least a few bottles for ten years, hopefully the beer continues to evolve and improve.
The Mad Fermentationist (Mike) at 7:12 PM