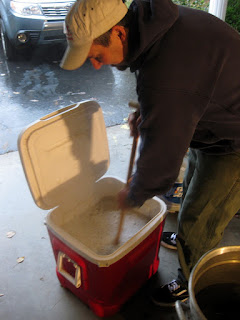 Recipes and ingredients are important, but brewing the best beer requires control over your process. You might get lucky once, but consistently great beer does not come with chance. The more variables you can manage the more repeatable your process will be, and the closer you can dial in a target. For example, mashing offers a level of control that you give-up by using extract. For where my process is, gaining more control over the fermentation is more important than focusing on wort production. For example, I can set the ambient fermentation temperature, but setting the temperature of the beer itself would be better; I make starters to ensure healthy/active yeast, but doing cell counts and viability tests to know what I am pitching would be better.

When it comes to smoked beers the biggest problem that brewers have is the variable nature of commercially smoked malt. Aecht Schlenkerla (which brews almost nothing but smoked beers) overcomes variability by smoking their own, blending different lots of smoked malt into the same batch of beer, and then blending multiple batches of beer together for packaging. As a homebrewer all that blending isn’t feasible, but then we don't need the exacting level of consistency. The biggest issue we have with smoked malt is that the aroma tends to fade as the malt ages, and unless you are able to find out how fresh the malt is it is hard to anticipate how much to use. By smoking your own malt you can exert more control over the process (not to mention play with smoke from less common woods as well as herbs, spices, I've even seen recipes that call for tossing strips of bacon onto the fire).

My friend Scott (who I brewed with for the first time shortly after moving to DC five years ago) invited me to his house to brew 10 gallons of smoked roggenbier (similar to a dunkel weisse, but with rye in place of the wheat). I have brewed a number of smoked beers before (Rauch Dunkel, Smoked Baltic Porter, Smoked Imperial Porter, Adambier, Smoked Doppelsticke, and DCHB Apple Smoked Stout), but this was the first time using home-smoked malt. New Glarus brewed a beer along the same lines (Unplugged Smoked Rye Ale – which was brewed with a combination of German beechwood and Briess cherry wood smoked malts), but it is stronger and smokier than something we wanted five gallons of. 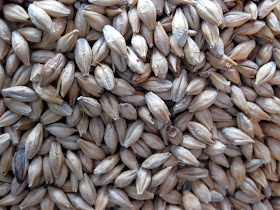 (A few weeks earlier...) to smoke the malt Scott thoroughly mixed base malt with enough distilled water to moisten (~1 cup in 5 lbs). Dampness helps the smoke to stick, and distilled water ensures that there is no chlorine, which would combine with the phenols in the smoke to produce medicinal tasting chlorophenols. Scott spread the damp malt onto old window screens placed in his smoker (the same one we used two years ago to smoke bacon). He made a small fire in the corner of the smoke box as far back from the main cavity of the smoker as he could to keep the heat low enough to avoid scorching the malt. He added cherry wood chips each time the smoke died down. Woods from fruit trees tends to produce a sweeter and softer smoke than other woods, making them a good choice when smoking malt for a beer fermented with a fruity yeast. After a couple hours the malt was dry and fragrant. He sealed it in a large Tupperware container where it stayed until I came over to brew (he had also used some in a smoked mild).

In addition to the rye and smoked malts we included Pilsner, Munich, CaraMunich, and Carafa Special II. Between the nearly 50% rye malt, specialty malts, and the assertive yeast we wanted to go easy on the smoked malt, so we settled on 3 lbs in 10 gallons. We ended up with a few more IBUs than anticipated due to a miscalculation in splitting the batch for two boils, but it the original gravity is towards the big end of the style so I’m not worried.

POSTPONED On a side note, Sunday December 11th from 2-5 PM I’ll be teaching another homebrewing class at Mountain View Farm in Purcellville, VA. This one will primarily be an introduction to brewing, but there will also be time to discuss whatever questions people have. If you are interested in attending the deal is the same as last time ($25/person or $40/couple), send an email to Shawna ([email protected]) to register. I'll also be bringing samples of the Peach-Amber Wheat we brewed during the August class. POSTPONED

Scott had home smoked the malt over cherry wood (mixed in enough distilled water to get it wet, then laid it over a screen with a very low fire all the way back in his firebox).

Tried to distribute the runnings from the double batch sparge evenly between two kettles. We ended up a bit under volume, but with plenty of gravity

Chilled to 65 F. Ran through a screen to remove the hops. Aerated with pure oxygen. Scott made a 2L stir-plate starter, decanted and pitched half into each 5 gallon batch.

I ended up with 4.5 gallons of wort at 1.072, added 3/4 gallon of distilled water when I got home to dilute. Fermented at ~58 F ambient with the lid just resting on top of the 8 gallon bucket. Active fermentation by the following morning, nearly blowing off by day #2. I left the lid resting on the bucket for a low-pressure open fermentation effect.

1/19/11 Reasonably happy with the way this batch turned out. If I brewed it again I would back down on the rye and hops, and up the smoke slightly. I think the cherry wood is a mild enough complement to the yeast and malt, good choice there.
The Mad Fermentationist (Mike) at 5:23 PM