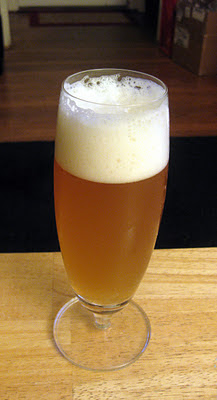 Wheat beers are supposed to be best fresh, hoppy beers too, right? For some reason the Riwaka Hefe Weizen that I brewed in early August just keeps getting better. Young the beer tasted strongly phenolic and yeasty, but it has cleaned up beautifully in the 6 weeks it has been on tap. That is one of the advantages of kegging, the beer has just been cold conditioning and continuing to pick up hop aromatics from the hops in the keg.

This is the second in my series of Southern Hemisphere hopped beers, the final (Galaxy Double IPA) will be ready for its tasting next week.

Appearance – Perfect, almost immobile, sticky, dense, white head. The body would be ugly for any beer other than a hefe weizen (ruddy orange-gold).

Smell – The nose suits the color with a potent citrus character (particularly fresh orange peel) and plenty of banana aroma. The combination of citrus and banana is complementary (smells like a fruit smoothie).

Taste – The aromatics from the nose come through in the flavor as well, but they are joined by a fresh caramel malt and bread. There is some light clove-spice (and maybe some cinnamon), but I think the hops are covering it up a bit. The bitterness is more assertive than a hefe weizen usually is, close to a hoppy pale ale. Rising bread yeasty finish.

Mouthfeel – Medium-light body with prickly carbonation. Right for a fall beer, but it might have been a bit thicker than I wanted if this was a summertime beer.

Drinkability & Notes – It took a few weeks on gas for this one to come together, but I'm really happy with where it is now. Riwaka seems like a good hop for anything you'd usually use Cascade or Centennial anything you want fresh orange aromatics. I didn't miss the decoction that I did for my previous batch of Hoppy Hefe, the hops covering any subtleties gained.
The Mad Fermentationist (Mike) at 6:44 PM