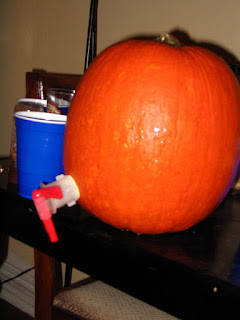 Pumpkin ale is a style that has some historical basis, but the cinnamon/nutmeg/ginger pie inspired creations are a relatively recent phenomenon. Colonists added pretty much anything fermentable they could get their hands on (molasses, spruce, various root vegetables) to augment or replace the malts they had. It is hard to tell what these original beers tasted like, but Randy Mosher provides his take on one in Radical Brewing.

As the poll indicates, not many people want gourd to be the primary flavor in their beer. This isn't a bad thing since it can be tough to use enough pumpkin to get that subtle earthy flavor into a beer, which is probably the reason so many brewers go heavy on the pumpkin pie spice. I'm not a fan of most of the standard, highly spiced, amber pumpkin ales that flood the market this time of year. I've had better luck with those based on dark beers like Cape Ann Fisherman's Pumpkin Stout, Midnight Sun TREAT, and St. Arnold Divine Reserve #9. The roast tends to cut the spices and provide more "beer" character. I've been meaning to re-brew the Chocolate Pumpkin Porter I made on a whim three years ago, but I missed my chance again this year (I have a chance to make another pumpkin keg either).

Talking to Ron Jeffries at Jolly Pumpkin for an article I am researching about American spontaneous fermentation for BYO he mentioned that this year he boosted the spicing in La Parcela (his sour pumpkin beer) just because he was sick of people complaining that they couldn't taste them. I don't know, when I brewed a Butternut Squash Sour Brown a few years ago I aimed for threshold levels of cinnamon and nutmeg, which seemed about right to me. Alphine's Ichabod from 2007 and 2009 was another great sour pumpkin beer, a revelation when I first tried it. The sample of Allagash's Ghoulschip (bottles of which were just sold for the first time) I had last year was good, although I was disappointed that it wasn't especially sour (while it is cooled in their coolship it is then pitched with ale yeast).

Between pumpkin ale and Oktoberfest fall seasonals aren't something I look forward to much, but happy to take suggestions in the comments if anyone has a favorite pumpkin ale.
The Mad Fermentationist (Mike) at 9:52 PM