Solera on Hallertau, Elderflower, and Cabernet

It took longer than we planned, but a few weeks ago Nathan and I finally pulled the first 20 gallons out of our solera wine barrel and then refilled it with 25 gallons of fresh wort. The extra volume required was to replace what was lost to evaporation and samples pulled over the last year and a half. Our two-man solera barrels seems to be harder to coordinate than the group barrels. When coordinating seven people it forces you to do more planning and scheduling while these solera barrels tend to just get pushed back knowing that we can brew enough to fill them on short notice. So after 19 months we settled on a cool Saturday morning for the pull and fill.

At this stage the beer in the barrel already tasted great: oak, overripe fruit, firm sourness, hint of earthy funk, and some red wine. Of the 20 gallons we pulled only five gallons was bottled as is, we had more interesting (Cantillon inspired) plans for the remaining 15 gallons. Five gallons went onto an ounce of elderflowers in an attempt to mimic Mamouche (Zwanze 2009). I actually though Mamouche was overdone with elderflowers, to the point that it smelled more like green bell pepper than anything floral, so we tried to aim for something subtler. The next five gallons went onto 3.5 oz of Hallertau Tradition. Cantillon Iris and Cuvee des Champions are both dry hopped with European hops. I've had some reasonably fresh bottles of Champions that were terrific, but every Iris I've ever had has been old enough that any hop character is long gone. I have loved the addition of citrusy American dry hops to my sours in the past, but this was my first time using European hops in the same capacity. 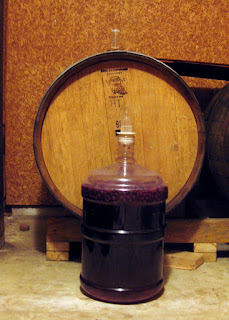 The final five gallons went onto a gallon of Cabernet Sauvignon grapes (St. Lamvinus is aged on Merlot and Cabernet franc grapes). This is rate of about two pounds per gallon, double the one pound per gallon that I thought was too light in my Lambic #3 (that beer may end up being combined with this one at bottling). We used the final bag of frozen grapes from the five gallon bucket I purchased last year (happy to have some freezer space again).

For the fill we decided to simply rack the freshly chilled wort into the barrel, rather than fermenting it out in carboys first. Our chosen method is certainly easier, but in the long run it risks introducing autolysis as the layer of yeast on the bottom of the barrel grows. Using fermented beer (especially a dry one) would be a good idea if the solera was getting too sour, since it would reduce the amount of fermentables available for the bugs.

We were pretty happy with the direction the beer was going, so we kept the recipe very similar to the one we had used initially (Pilsner, wheat, oats, and minimal hopping). When we racked the beer into the barrel we did not add extra yeast, which turned out to be a mistake. The barrel had been sugar-free for too long, and as a result the microbes that were left took about a week to start producing enough CO2 to put bubbles in the airlock. This probably wouldn’t have been a problem if we had stuck to the 12 month rotation we had targeted, but after so long I can’t say I was surprised. We'll make a determination what to do at our next pull, I'd like to avoiding more yeast if possible (again to minimize autolysis).

It was appropriate that we finished filling the barrel just in time to make it to ChurchKey for the tapping of Cantillon's Zwanze 2011, one of their lambics aged with Pineau d'Aunis grapes and Bramling Cross dry hops. I was lucky enough to have tried the previous version (test batch?) of this beer at the Lambic Summit last year. I thought the dry hops added to the new version added a subtle complexity that made for a really interesting beer. Before the tapping I got to sample a blend from Gueuzerie Tilquin for the first time, great to see a new blender (especially since it is the first that is allowed to buy from Cantillon). The gueuze was solid, with a firm acidity, and a big lemon character. It was not quite as rustic/funky as I like, but that should come with additional time.

After two weeks on the hops and elderflowers we bottled those two portions, leaving the wine grape carboy to complete its secondary fermentation. Hopefully this barrel stays productive, increasing in complexity as the average age of the beer steadily increases. It is a lot of fun to have this much sour beer laying around because it allows us to do experiments that we might not try otherwise (especially in such large amounts).

I am beginning to worry about our second solera barrel, at nine months it has already taken on a slightly acetic edge. We are aiming for an early November pull from it, at which point we will decide whether to refill it as planned, or pull the plug and find some friends to help with bottling/kegging all of it. Our plan was to get these on a similar schedule so we could blend them at bottling, but it looks like that may never happen... luckily we only spent ~$200 getting each one of these going including the barrels (about the price of a gallon of Zwanze 2011).
The Mad Fermentationist (Mike) at 6:11 PM