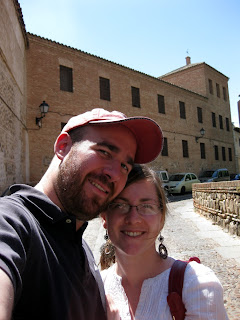 At the end of May Audrey and I spent nine days in Spain, starting in Madrid before traveling south to Granada and Seville.  Spain is a striking country, with a complex history, rich culinary tradition, and wonderful wine, but finding a good beer was next to impossible.  Almost every street has at least one cerveceria (beer bar) and I saw more people drinking beer than anything else, but the only beers available at most restaurants were bland pale lagers. Ordering a "cerveza" would result in a Cruzcampo, Alhambra, or another fresh, clean, pale lager (often served in an attractive stemmed glass).  The experience conjured up visions of the pre-craft beer US, with lots of beer, but few interesting options. 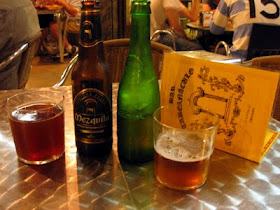 We did bump into a few somewhat interesting local beers like Mahou Negra (a dunkel), and the oddly named Alhambra Mezquita (mosque) which I can only describe as an old ale lager. There were a couple bars we walked by that advertized a selection of imports, often on display in their windows were 10-20 imported beers (Chimay, Franziskaner, even the exotic Budweiser). The last night of the trip we stumbled into the local mega-department store looking for a few bottles of wine to bring home, what I found were bottles of Westmalle Dubble for 1.60 euros (~$2.25) each (a good deal even with a bad exchange rate).  Spain certainly wasn't a beer desert (like India was), and it seems like a country that is ripe for a craft beer explosion. 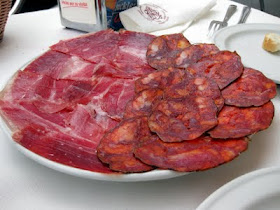 The red wine was cheap and generally very good, but when it is nearing 90 degrees that isn't my beverage of choice. Sadly sangria, the Spanish solution to that problem, was hit-or-miss. At some restaurants it tasted like wine with a subtle citrus flavor and light sweetness (wonderful), while other time it either tasted like Hi-C (too much sugar, and with extra fruit like watermelon) or one that tasted oddly of Butterfingers.

The food was similar to the sangria in that some places were great, while others were lackluster. My normal scheme when traveling is to find restaurants that look like the locals go to them (trying to avoid eating in touristy areas or places that look gimmicky). For the most part this landed us at small bars and restaurants where the food fell between iffy and decent. I was disappointed how little variation I saw in things like tortilla (potato omelet) and bocadillos (sandwiches).  We did have some great meals thought, fish soup in Granada, roast suckling pig in Madrid, stewed partridge in Toledo. We also got a number of great tapas on Calle Navas in Granada (like shredded spiced meat mini-sandwiches). It is a great concept to be able to get a small plate of food to try something, and then move on if it wasn't especially interesting or well-done. 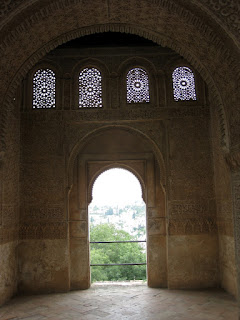 It was a busy nine days, but we got to see and do almost everything we had wanted to.

Picasso's Guernica at the Riena Sofia in Madrid is still relevant and powerful.

Why are Europeans so obsessed with bottled water, I thought they were supposed to be environmentally conscious?

The architecture, fountains, and carvings of the Alhambra in Granada were stunning.

The number of times our servers disappeared for 30 minutes or more when we wanted more food, or were looking to pay was astounding. 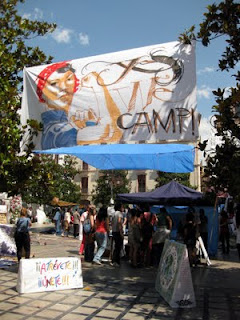 The public transportation systems were clean, on time,and  reasonably priced (compared to America).

Spain would be a difficult place to visit for a strict vegetarian, almost everything had a bit of jamon (delicious thin-sliced salt-cured ham).

Despite my Catholic upbringing, looking at a saint's 400 year old arm bone in a gold case at the Seville Cathedral was still creepy.

The language barrier (I took Latin in high school, Audrey knows Arabic and French) didn't create much trouble for us.  We learned a few key phrases, and hand gestures were sometimes required, but often the people we met spoke some English.

It was interesting to see young people out in the streets peacefully protesting, trying to change their government.
The Mad Fermentationist (Mike) at 10:43 PM