A year and a half ago my friend Devin and I brewed a 10 gallon batch of golden sour ale with Al's Bugfarm III (back before he started East Coast Yeast). Half of that batch had the honor of being the starter for the first solera Nathan and I brewed (which is now overdue for its first bottling) while the other half was split into several fractions. The problem with splitting a batch of sour beer both with someone and between several variation is that you don't end up with that much when the beer is finally ready (I only got five bottles of this “straight” variant). 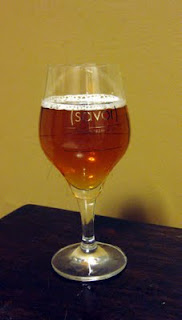 Appearance – Perfectly clear golden-orange, but the thin white head leaves something to be desired (especially surprising with both wheat and oats in the grist).

Smell – Overripe stone fruit, citrus (especially orange), and that distinct "sour beer" acid aroma. There is some basement must, but not quite to the the level of being funky. Not much malt aroma despite the Golden Promise and Maris Otter used as the base malts.

Taste – Bright crisp lemony tartness up front, with a moderately dry finish. The sourness is refreshing, not harsh or biting. The fruit from the nose comes through fresher in the flavor.   There is some lingering toasty mustiness, reminiscent of pipe tobacco.  Just a touch of cider vinegar in the finish as it warms.

Mouthfeel – Carbonation is present but low, I think having it a bit bubblier with such bright refreshing flavors/balance would have enhanced the character of this one. The mouthfeel is somewhere between medium and light, which works well in this beer.

Drinkability & Notes – A unique fruit character for a sour beer, complex and yet still very refreshing. I'm excited to see how close the yeast character in the solera mirrors this beer (samples have suggested that they are close).
The Mad Fermentationist (Mike) at 9:17 PM