The aroma of a ripe local peach has few equals, but what kind of peach is the best choice to add to a sour beer?  Yellow peaches have a classic focused peach aroma and solid acidity, while white peaches tend to be less tart with a more intricate aromatic character.  Two-and-a-half years ago I brewed a sour honey ale, half of which was aged on white peaches, a year later I brewed a golden sour, a gallon of which was aged on yellow peaches.  Tasting these two beers side-by-side begs the question: which peach variety marries better to the complex character and added acidity of a sour beer?

Appearance – Slightly hazy yellow-gold beer. A moderate pour inflates a fine-grained white head, but it falls after only a few minutes.

Smell – The aroma is saturated with fresh peaches, covering up most of the honey complexities that the peach-less version exudes (although as it warms some sweet-waxy aromatics tease out).

Taste – Enough lactic sourness that my mouth involuntarily chews a couple times after the first sip. The fresh peach flavor is the dominant character here again, nicely lingering into the finish (with the addition of a bit of coconut). The fermentation character is clean, with minimal Brett funk. 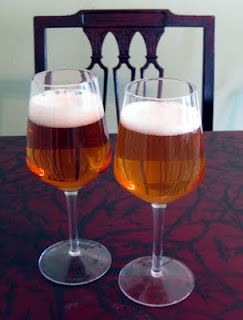 Mouthfeel – Crisp and light, with moderate carbonation. Refreshing, a good match for the peach flavors.

Drinkability & Notes – A great beer that still hangs onto its freshness despite its advanced age. The white peaches are still so alive it is hard to remember they were picked two years ago. This beer shares a lot in common with Dogfish Head Festina Peche, although the DFH beer is less acidic/complex.

Appearance – Golden-orange and perfectly clear. The white head has slightly better retention, but it still sinks to a thin ring while I still have half a glass left.

Smell – Despite the fresh fruit added, it has a more singular “cooked” peach aroma (like a peach pie). The aroma also has some tart apples, a bit of malt, and Sweetarts.

Taste – The sourness is slightly softer and it has a more nuanced character (less lactic, more malic). The peach flavor too is subtler and allows some malt character to come through. The funk is mild, but present as additional overripe fruit and damp oak flavors.

Mouthfeel – Slightly heavier body, the carbonation is prickly. The mouthfeel goes well with the more savory less refreshing flavors this one possesses.

Drinkability & Notes – An easy drinking sour beer, but I think it could have used a bit more peach. The yellow peaches match well with the flavors of the beer, adding complexity without overwhelming. The peach flavor already seems to have mellowed from when it was bottled, surprising given how much younger this one is.

Verdict
In the end either white or yellow peaches can work, it is more a matter of what what you can get fresh and what sort of peach flavor you are looking for.  If forced to choose I'd take the white peaches because they have more punch and depth than the yellow peaches.  That said, a blend of the two beers is wonderful, so mixing fruit varieties is another option worth considering.
The Mad Fermentationist (Mike) at 8:12 PM