How much of the beer you drink is homebrew? 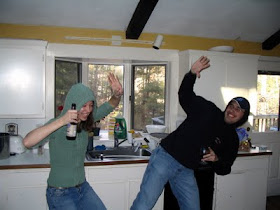 The majority of those who voted drink mostly homebrew (at an average of 60.75%).  I'll add myself to that group as well (maybe 70%?), especially now that I own a kegerator and put more of a focus on brewing session beers.  When I buy bottles to drink at home it tends to be special releases or strong beers I want to age.  The craft beer industry (including the beer stores that specialize in it) has reached the point where there are so many bottles available that it is hard for me to trust the freshness of any beer that isn't date labeled (or recently released).  With homebrew I know when it was brewed, and that it has been stored correctly.

One of the reasons I still buy as much beer as I do is the gap between when I get an idea of what I want to brew and when said beer is ready to drink.  While the beer is fermenting I'll often pickup a six-pack of something similar to tide me over. I wish homebrewing was more like cooking and when you were done brewing at the end of the day the beer would be ready to drink.

It's not just my homebrew I enjoy, I also like drinking my friends beers.  It is enlightening to sample a beer and then be able to talk to the person who made it.  So often when I drink a great commercial beer it is hard to find much information about the ingredients/techniques that went into brewing it (although it is great to see breweries like Deschutes posting recipe info for homebrewers).  Thank you to all of the people who have shared their beers and knowledge with me over the last few years (either through the mail or in person).
The Mad Fermentationist (Mike) at 8:22 PM