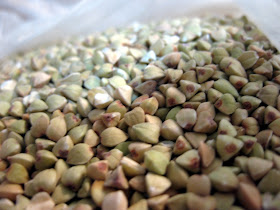 Barley provides the bulk of the fermentables for just about every beer style (even "wheat beers" are often close to 50% barley malt).  The other grains commonly included in beer fall into two categories: those that contribute flavor and body (oats and rye), and those that lighten flavor and body (corn and rice).  While those six grains cover (guessing here) 99.9% of the beers brewed in America and Europe there are a few other grains that are used sporadically: spelt (I recently sampled a spelt wine from SixPoint's Mad Scientist series), sorgum (used mostly for gluten-free beers), amaranth, and today's subject, buckwheat (which isn't technically a grain biologically, but I'll use the term anyway).

The only exposure most people have to buckwheat is in pancakes, but it is also toasted and sold as kasha (especially popular in Russia).  The flavor is in the same general category as rye; it is a bit more rustic, grainy, and flavorful than the routinely used grains.  Part of that character derives from buckwheat's caprylic acid content (capr- comes from the Latin for goat, so you can guess what flavor it adds).  The great thing about some "off" tasting fatty acids is that they provide appealing aromas after Brettanomyces combines them with a molecule of ethanol to form an ester.  In this case I'm hoping the Brett will create ethyl caprylate, an ester which Wild Brews describes as "Waxy, Wine, Floral, Fruity, Pineapple, Apricot, Banana, Pear, Brandy". 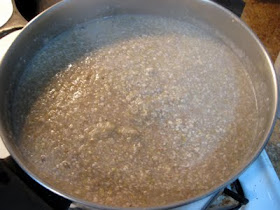 I bought two pounds of whole (hulled) buckwheat from the bulk bins at the local COOP (all those fatty acids oxidize quickly, so freshness counts).  I ran it through my mill and then boiled it with a generous amount of water to gelatinize the starches.  The rest of the grain bill was inspired by Russian River's Supplication.  The bulk of the grist is comprised of German pils and Vienna, with unfermentables from crystal 40, and color from Carafa Special III.   Once the buckwheat porridge was thick and gooey, after 15 minutes of boiling, I added it to the main mash along with enough hot water to boost the temperature from the protein rest up into the saccharification range.  The first runnings had an odd viscosity that looked almost identical to the ropy "sickness" that our Sour Red experienced, but by the end of the boil it seemed like normal wort.

I used a lower conversion temperature to test how well a lower level of unfermentables would work with Jolly Pumpkin bottle dregs, which tend to be more viable/aggressive than those from other breweries (since their beers are mashed cool and bottled young).  Hopefully this beer will be ready to bottle by next winter, but I'll wait for the gravity to stabilize before doing anything with it.  Eventually it will be interesting to compare this beer to our Dark Saison #3, which was brewed with a small amount of buckwheat honey (that provided an earthy, farmyard aroma when the beer was young). 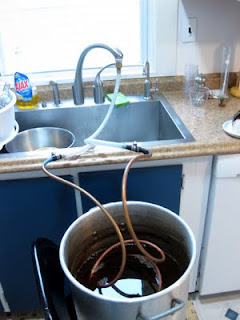 Mashed in the grain while I boiled the buckwheat for 15 min. Added the buckwheat (really gloppy) and stabilized at 140, then added 180 degree water to get the mash temp up.

Slow sparge, even with a few handfuls of rice hulls. After 90 minutes 7.5 gallons of 1.048 runnings had been collected.

Chilled to 70. Shook to aerate, pitched T-58 without rehydrating. Dregs from a 9 month old bottle of Jolly Pumpkin Calabaza Blanca and a 6 month old La Parcela. Left at 64 F ambient to start fermenting.

Good fermentation after 12 hours, threatening to blow-off after 24.  Visible fermentation ceased after 3 days.

4/21/11 Racked to secondary, down to 1.012.  Already nicely tart, pretty fruity/yeasty still though.  Took a bit longer than I intended to get around to it.  No oak added yet.

1/29/12 Solid beer, complex funky nose, bright acidity, overall very pleased. Sadly the tropical notes from the Brett/buckwheat have not emerged, although maybe it will will extended aging?

4/20/12 Bottled the gallon that was on cherries with .7 oz of table sugar and a small amount of rehydrated champagne yeast.

2/28/13 Tasting of the cherry portion, the fruit really covers up the funk. Balanced, drinkable, fun, but not exciting.

There is a good amount of C40-Crystal, around 10%, we also get color from Vienna Malt, it is about 15 or 20% of the grain bill and also we use Carafa 3 Special malt from Weyermann (sp) to get color, this leaves a cleaner flavor but the special B and chocolate will certainly work.

We ferment in the primary with Abbey 530 Yeast and remove the yeast post fermentation and hit the beer with Brett and the cherries (25 pounds to a 60 gallon wine barrel) in the wine barrel and let it sit for 2 months. After that we add the bacteria and more Brett, it normally ages for 12 months in the barrel.
The Mad Fermentationist (Mike) at 7:49 PM