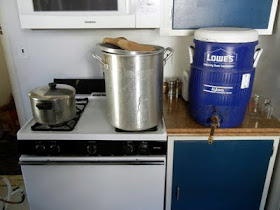 It is hard enough to brew a great sour ale when you know what microbes you are pitching, so why did I want to take on the additional challenge of souring a beer with unknown local microflora?  I think it was some combination of the romance and curiosity of brewing a beer that gets its unique character from the area it is brewed (terroir).  Some people suggest trying a smaller test batch first, but if I have to wait more than a year to see how the evaluation goes I might as well have five gallons to show for it.

Propagating the wild yeast I captured in my backyard and barrel room boosted my confidence, the starters had a surprisingly clean flavor with a hint of lactic tartness.  Judging souring microbes after a few weeks can be dangerous since there are strains that may not have made their presence known by this point; I'll be interested to see how the flavor develops as the beer slowly ferments. 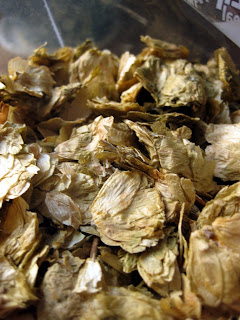 The brew day was very similar to the one for my third Lambic (lots of details/pictures on the process in that post).  I applied what I had learned from that batch to the turbid mash I did for this beer.  Despite the complexity and extra attention required (it helped that a few friends stopped by) a turbid mash only takes about 2 hours (it is the long boil to reduce all of that wort that kills most of your day).  I adjusted my efficiency down from my previous attempt to hit my target OG (despite the long boil and scalding sparge my efficiency was similar to my standard brewing process).  The only change I made to the mash schedule was to hold the turbid portion of the runnings at 190 F (instead of 176 F) to ensure that it would raise the mash to 170 F when it was added to reach mash-out.

With 8.5 gallons of wort collected I started the 225 minute boil.  I added three ounces cheesy 2007 Willamettes near the start (a generous addition of aged hops is helpful for a beer like this to slow the growth of spoilage microbes).  When I tasted the wort I was surprised how little bitterness the hops imparted (although looking at them I shouldn't be too surprised), luckily none of their funky aromas carried over either. 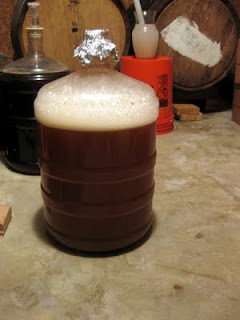 After force chilling the wort I pitched about one quart from each of the two starter.  While there was some yeast(?) that had flocculated to the bottom of the starter vessels I did not want to decant them because there were most likely numerous organisms that had not dropped out.  Visible fermentation took about 24 hours to commence.  During the first week I held the ambient temperature at 65 F to give the yeast the best chance to complete a healthy/calm primary fermentation, letting it rise slightly after that.  The krausen was primarily composed of large, delicate bubbles (a sign that the strains at work are probably less flocculant than standard brewer's yeasts).

My plan is to leave this beer in the primary fermenter for the next 12-18 months.  At that point, assuming it doesn't taste terrible, I'll bottle half of it as is and add a few pounds of (extremely bland) mulberries from the tree in my backyard to the remainder.  If this batch is successful I may use it to start next year's Lambic, heading down the road to a truly wild house culture.

Notes
-----
3/24/11 Started spontaneous fermentation starters. 1.030, .5 oz aged hops, and 1/4 tsp nutrient: upstairs, backyard, and in the barrel room. Did not force chill, and put them in pots covered with cheesecloth. The next morning I moved them all inside and put them in growlers with airlocks.

Minor activity after a few days.

3 weeks later I tossed the upstairs (black mold) and stepped up the other two.

The outside had the best aroma and most active/flocculant yeast. The barrel room smelled a bit off, but seemed to be Brett (pellicle?).

Wheat was whole/unmalted from the COOP, Pils was Best Malz.

Held the turbid portion @190 F before adding it back for the mash out.

Collected ~8.5 gallons of 1.032 runnings. Added 1 qrt of water with 30 min left in the boil since I was lower on volume than expected.

Ended up with 4.5 gallons post boil/chill/strain (surprisingly smooth, low bitterness), 1 qrt each of both ambient starters (light lemony tartness). Pitched at 70 F, only aeration was straining. Left in 6 gallon better bottle at 66 F ambient. No oak yet.

Good fermentation by 24 hours (big bubbles). Ambient had creeped up close to 70 F so I moved it to a 65 F fridge.

5/1/11 Moved the fermenter out of the fridge and attached an airlock. Still a bit of krausen, odd funky/yeasty smell.

10/29/12 Racked two gallons onto about two pounds of mulberries from my backyard. Bottled the rest with 1.75 oz of table sugar. No extra yeast, so it may take awhile to carbonate. FG 1.002.

4/25/13 Tasting notes on the plain portion. Given where I live, the results are remarkably reminiscent of a Belgian lambic!

6/6/13 Tasting notes on the mulberry portion. More fruit character than I expected from eating the berries straight. Very drinkable, despite the crazy process.
The Mad Fermentationist (Mike) at 7:03 PM