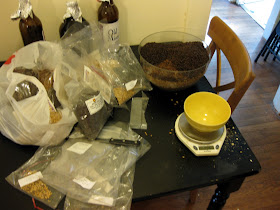 Russian Imperial Stout is one of the styles that I enjoy drinking, but have yet to master brewing.  The best examples of the style are smooth, balanced, and have a depth of roasted complexity that I have yet to replicate.  I've made some solid attempts (like my Breakfast Stout Riff), but none that I've been completely satisfied with.

One of my favorite commercial examples, Portsmouth Brewing's Kate the Great. Like a lot of other notable beers the release for Kate is very limited, which makes bottles tough get.  In fact Kate the Great is released at the brewpub just one day each year (it sells out quickly due to how rare/popular it is).  A few years ago, before it was bottled/hyped, there were a couple month each winter when you could drive up to the brewpub (as I did when I lived in Massachusetts) to get a snifter of it with dinner.

One of the aspects I like about brewing (or cooking) someone else's recipe is that it forces me to try combinations that I wouldn't otherwise.  Sometimes I learn something that changes the way I write recipes, other times it reinforces what I already thought.  This clone recipe comes straight from Todd Mott (Portsmouth Brewing's brewer) by way of a post on Homebrew Talk.  It is a complex recipe that calls for eleven malts and six hops.  In an NPR interview Todd previously mentioned that the brewery adds brown sugar to Kate, but this recipe didn't mention it.  This recipe is the polar opposite of the 90 Shilling Stout I just put on tap, which had only two malts and one hop. 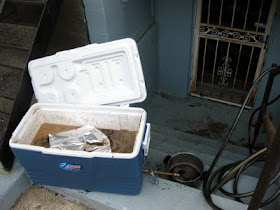 I had to add one pound of light dry malt extract to the boil because my efficiency was considerably lower than I had anticipated.  I adjusted the hop bill based on what I had on hand, with six months or more of age on the beer the hops will not be a big factor in the final character anyway.  I had a yeast cake of WY1272 (American Ale II) from my India Red Ale so I pitched part of that instead of the WY1056 (American Ale) that was called for.  These two strains have similar attenuation and produce similarly clean flavors when fermented in the 60s F. 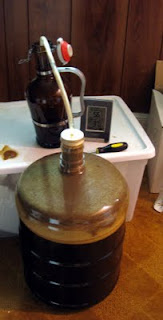 This combination of yeast and wort produced one of the most aggressive fermentations I've seen (about 1.25 gallons went out the blow-off tube despite ambient temperatures in the mid-50s).  After 36 hours the yeast was still ejecting beer so I decided to pour the remaining liquid into an eight gallon bucket (where I should have started fermentation).  Luckily I began with a bit of extra wort, so I still yielded 4 gallons of beer when primary fermentation was complete.

This massive stout is currently sitting on 3/4 oz of port soaked French oak cubes for the next few months until I get around to bottling it.  A keg seemed like a good aging vessel since I won't have to worry about topping off an airlock, and I could purge it with CO2. Hopefully it will be ready to drink by the end of the year. 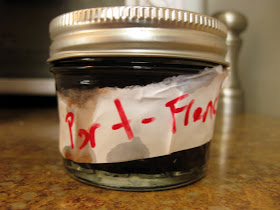 Mash started a bit cool so i infused a bit of boiling water after 10 minutes to keep it up, by the end of the mash it was down in the mid-140s. pH was a bit low (5.1) half way through the mash, so I added 2 g each chalk and baking soda.

Collected 3.5 gallons of first runnings. Batch sparged with 180 F water and collected 3.75 gallons of second runnings. Gravity 1.068... a bit lower than I was expecting. Boiled down 2 gallons of extra final runnings I collected to add to the beer.

Added 1 lb of light DME to a quart of the wort, brought to a boil, and added to the cooling wort since I was still under gravity.

Chilled to 68 and pitched onto the yeast cake from my hoppy red. Shook to aerate, then pumped in 60 seconds of O2. Left at 57 F ambient to start fermenting.

Massive blow-off. After 36 hours I poured it into an 8 gallon bucket since it was still losing beer. Maybe 1.25 gallons blown off.

4/2/11 Moved to 62 F and added an airlock to let it finish fermenting (still had a really thick krausen). Looks like it is down to about 4 gallons, I'll be lucky to get 3.5 gallons of finished beer out of this one.

Bottled the remaining 2.75 gallons with 1.5 oz of cane sugar and a gram of rehydrated wine yeast.  The beer had developed some carbonation in the keg from slow fermentation.  Beer still seemed pretty cloudy.

10/30/1 Tastes great, but is too carbonated. Not sure if it was the wine yeast eating more than the priming sugar or what...

11/5/11 Bottled the resulting 1 gallon of the portion that had been on chilies with ~1 g of rehydrated Premire Cuvee and .5 oz of table sugar. It looked like there was a bit of wild yeast growth on the floating chilies on the top, but it tasted great.

12/15/11 Tasting of the plain version. Not a bad beer, but just not enough roast to be a great RIS. I'd probably go 50% higher (if not double) the roasted barley, chocolate, and black if I brewed it again.

4/23/12 Tasting of the Mole version. I like this one a lot, but it could have been mashed a couple degrees warmer. I could go slightly higher on the cocoa, and with vanilla bean instead of extract as well.

Boil the wort for 5 mins. for the hot break and then add your bittering hops for 75 mins. We bitter at 38 IBUs with Magnum, 10 IBUs with Styrian Golding and 15 IBUs with Perle. This is the bittering addition. We add a flavor addition for 15 mins with Centennial for 2 IBUS. Our final addition of Palisade, Styrian Golding and Willamette account for about 3 more IBUs at whirlpool. Cool wort and pitch a good amount of White labs WLP 001 or Wyeast 1056 and ferment til it is done. Put into conditioning for about 5 or 6 months and you'll have an amazing imperial stout.

"All of Kate is lightly oaked. We make our own Portwood simply by infusing oak spirals ( The Barrel Mill, Avon, MN- 800.201.7125) with local Port. Of course if I told you the amounts and proportions I have to kill you!! Actually, we take 6 spirals and break them up, place them into a 10 gal. corny keg and pour 3 bottles of Tawney Port over the spirals. We add about 10 PSI to the keg and let the concoction sit for 18-25 days. Then we fill the remainder of the 10 gal. keg with Kate. Let it sit at ambient temp for 45-60 days then inject the 10 gals back into the 440 gals of KtG. Once the keg is empty we then back fill the 10 gals and let the Kate sit on the oak for another 6 months. This become the double oaked Kate. Very rare, only about 56 bottles produced. Hope this helps. Kate can age for 6 years once in bottles, if truth be known!! Cheers! Tod Mott"
The Mad Fermentationist (Mike) at 6:50 PM