Stout was originally an English invention, but over the last few hundred years the style has been spread around the world.  Brewers have changed it to suit the local tastes and ingredients, morphing it into sweet, refreshing tropical versions; monstrous, bourbon-barrel-aged American variants; and dry, bitter, Irish stout.  There are other dark beers, but stouts are loosely held together by having roast as their primary flavor.  As I've discussed in the past, the umbrella categories of porter and stout are indistinguishable in many cases (if someone wanted to call this batch a Scottish porter it would be hard for me to argue).

This 90 Shilling Stout was inspired by traditional Scottish breweries like Traquair House that get their caramelized complexity from an extended vigorous boil (not crystal malts).  I simply increased the percentage of roasted barley to 5% from the standard 1-2% to darken the beer and add a balancing coffee-like roasted flavor.  This is the most satisfying type of beer for me to taste, based on an idea rather than a specific commercial example or style guideline. 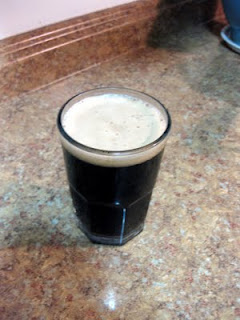 Appearance – Cocoa brown body with clear mahogany highlights when held to a light. The khaki head floating on top is composed of tiny bubbles. Decent lacing, but the head does not last as long as I would like.

Smell – Light roasted coffee, caramel, and toasted bread. The aroma also has a rustic/woody character that I assume is from the ECY Scottish Heavy strain.

Taste – The flavor is toastier than the aroma, the Maris Otter really comes through. The roast is smooth and coffee-like (without acrid harshness). The light bitterness is enough to balance out the moderate malt sweetness. The finish has the same oaky character from the nose, complex for such a simple recipe.

Drinkability & Notes – A beautiful session stout (although the alcohol is a bit too high for a long session). The malt/yeast complexity is what brings me back for a second sip, but the balance is what convinces me to have a second glass.
The Mad Fermentationist (Mike) at 8:50 PM