It has been a year and a half since I last posted thoughts on my attempt to copy Hair of the Dog's Adam.  It never carbonated (one of the risks of bottle conditioning a high alcohol beer), but through the magic of a carb cap I can pump some pressured CO2 into a bottle before serving.  I've been meaning to adapt the technique from this recipe (boiling down past the target volume and then topping back up with water post-boil) to make a 100% Maris Otter English barleywine.  It seems like a simple recipe would be a good way to actually gauge what the long concentrated boil is accomplishing without specialty malts complicating things.

Appearance – Viewed straight on it is deep, dark, impenetrable blackness, but held up to the light the edges are clear amber/red. The head is light tan, and composed of really fine bubbles. Decent retention leaving some lacing down the sides of the tulip.

Smell – Aged doppelbock: prunes, bready malt, and light chocolate. There is some subtle earthy smoke, but nothing too aggressive. 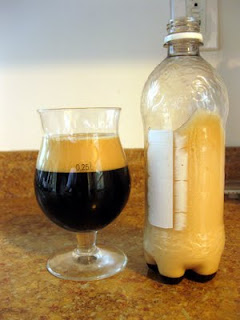 Taste – The spicy smoke helps to cut through the residual malt sweetness (it does not have that really strong iodine-bog flavor that some peat smoked beers get). There is a mild balancing bitterness as well, but even when fresh it never tasted as sharp as the 66 IBUs would suggest. There are some pleasant dark fruity oxidation flavors, but no cardboard (or worse). The smoke character reminds me of a lightly bourbon barrel aged beer, providing some of those same notes that a charred barrel brings.

Drinkability & Notes – This one has aged into a beauty, complex, but still drinkable. The bitterness and smoke make it easier to drink than most aged German beers that head toward cloying as they age.  This is about as close as I could imagine getting to the original, great recipe.  I'm down to my last six-pack, sorry to see it so low when it is drinking so well.
The Mad Fermentationist (Mike) at 7:51 PM