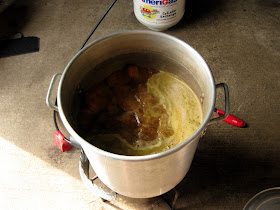 I try to keep a hoppy beer on one of the two taps of my kegerator at all times.  I'm often disappointed when I buy hop forward beers at the store, not that craft brewers aren’t making some tremendous IPAs, but too often by the time I take them home they aren't as fresh as they should be.  I've given up buying any beers where freshness counts that aren't dated (or just released).  One of my least favorite characters in a beer is the stale odor of oxidized American hops, for some reason aged out European hops don't bother me nearly as much.

There aren't many red/amber ales I love, too often they have an unbalanced caramel sweetness, sold more on appearance than flavor.  I brewed Jamil's Red Ale recipe a few years ago, but it wasn't hoppy enough for my tastes (his recipe in Brewing Classic Styles looks better).  Founder Red's Rye PA has been one of my favorite beers for years though, and there are certainly a few others that I've thoroughly enjoyed (like North Coast’s Red Seal Ale and Maine Beer Co.’s Zoe Ale).  My recipe is not intended to be a clone of Red's Rye (or anything else), but I borrowed the idea of hopping a red ale like an IPA rather than a Pale Ale. 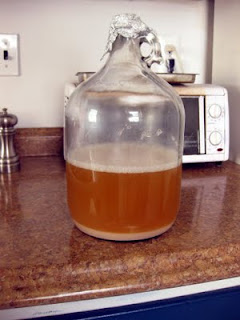 For the grist, in addition to pale malt I added a couple German cara-malts to add some sweetness and caramel flavor, and pale chocolate to increase the color without adding a roasted flavor (a smaller amount of Carafa Special would work as well).  The hopping strategy was the same as many of my hoppy beers, with additions at the start and end of the boil, as well as two additions in the keg (one at room temperature followed by another cold while serving).  I used a combination of Centennial and Amarillo, two of the fruitier American hops.

I've read a lot of debate about how long it takes for dry hops to impart a "grassy" flavor.  Many people report just a couple weeks, but that doesn't match with my experiences (I've left whole hops in the keg for months without issue).  My assumption is that the green flavor brewers are getting is chlorophyll.  As a result pelletized hops (which have been ground up exposing the interior of their cells) would cause the problem faster than whole hops (for the same reason that mowing the lawn makes it smell grassier).  This batch used all pellet hops (leftovers from my recently kicked Pliny the Younger clone), so it will be interested to see if I notice any difference with how the flavor changes as it sits on tap.

Collected 6.5 gallons of 1.050 runnings from a batch sparge.

Added half of flame out hops, waited 10 minutes before chilling. Waited 1 minute after chilling started to add the second dose of hops. Forgot to add gypsum earlier, so tossed in 4 g midway through chilling.

Chilled to 67 F. Decanted 1 L of the starter, pitched, and shook for 3 minutes to aerate. Left at ~62 F ambient to start fermenting.

4/2/11 Added 1 oz each centennial and Amarillo pellets in a hop bag with some marbles to weigh them down.  Gravity was still 1.018, hoping it will drop a bit more now that the temperature is a few degrees higher (tasted great though).

4/9/11 Moved to the kegerator before switching out the hops and hooking up to the gas. 6 hours later switched the hops out for a fresh dose, and hooked up to 10 PSI.

5/11/11 What a great beer, nice citrus hop character, plenty of toasty malt to back it up, not too sweet.
The Mad Fermentationist (Mike) at 5:48 PM