Over the next few weeks I'm going to revisit a few batches that I haven't done tastings for in more than a year (hopefully before the weather gets too hot and my interest in drinking well aged complex beers wanes).  Seth and I brewed this Temptation Clone about three and a half years ago.  Some of the stronger funky flavors have calmed down a lot since I did my first tasting, but sadly the acidity never increased to where I wanted it.

One of the issues I had with this batch was that I tried to follow Russian River's process too closely without taking into account the areas where I wasn't able to.  The saccharification rest called for (151 F) was lower than I would have usually selected and I only used microbes grown from the oak chips Vinnie inoculated with the Russian River's house culture.  I think this is an important point, if you can't imitate a brewer's technique 100% you may need to make adjustments in other areas to compensate.  In this case because I wasn't barrel aging or pitching a large amount of healthy Lacto/Pedio cells I should have upped my mash temp to ensure the bugs had more complex carbohydrates to work on.

It wasn't a complete loss though, the beer is still delicious and it reminded me to look at the entire process when changing any single variable. 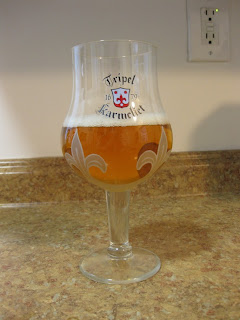 Appearance – The bright white head is about two fingers thick to start, but it quickly sinks to a patchy covering. The body of the beer is clear golden yellow.

Smell – The nose is a complex blend of fruit (apples, pears), aged white wine, acid, and a subtle floral funk. It still has a relatively fresh aroma despite its advanced age.

Taste – The flavor is mildly tart with a slight malty sweetness starting to creep in. The flavor is still snappy, but it has started to lose some of the firmness it once had. The Brett funk is still wonderful though, with hay and lemons. The wine flavor is more restrained than it once was, but it still has a white grape character.

Mouthfeel – Good medium-light body, solid carbonation without being spritzy.  Not as carbonated and champagne-like as the original.

Drinkability & Notes – A wild beer that is balanced and easy to drink, but is it as good as Temptation? Of course not. However it is a solid complex winey sour blonde. It certainly would benefit from some additional acidity, which could be accomplished by mashing hotter and adding a higher pitching rate of microbes along with the primary yeast.
The Mad Fermentationist (Mike) at 5:37 PM