Fermenting beer with truly wild microbes (that is to say not ones found in a tube, pack, or bottle) has recently started in earnest among American sour beer producers. Russian River, Allagash, Jolly Pumpkin, Midnight Sun, and Jester King have all tried their hands at spontaneous/ambient fermentations. Despite this recent surge in interest, allowing the yeast and bacteria present in the environment to ferment wort is nothing new; spontaneous fermentation was the way beer was originally made before brewers learned to repitch yeast from one batch to the next. This method has been brought to its highest form by Belgian lambic brewers, who produce beers with a balance of acidity and complexity that is unrivaled.

There is nothing special about the wild microbes floating around Belgium; the main sour beer fermenters: Saccharomyces, Lactobacillus, Pediococcus, and Brettanomyces are found all over the world. It is the selective pressure lambic brewers have placed on these microbes (as well as the masterful post-fermentation blending) that allows them to produce such remarkable beers. For decades these brewers and blenders have been reusing the barrels that make good beer, and getting rid of the ones that do not (burning them for fuel in the case of Cantillon). First use barrels are sometimes inoculated with microbe laden beer from an “established” barrel to give it the best chance to produce high-quality beer. All of this effort on the part of the brewer/blender reduces the role luck plays by providing each batch with proven microbes (in addition to the ones that randomly land in the cooling beer).

Many American brewers mimic this process by racking their "spontaneous" beer into barrels that have previously held successful sour beers (which often used commercial bugs). For example Russian River Beatification is allowed to start fermenting in the mash tun before it is moved to barrels that have already been used multiple times for other sour beers, ensuring they are already saturated with microbes and lacking oak character. Vinnie Cilurzo, the head brewer at Russian River, cleans his barrels aggressively with hot water between each batch, allowing only the strong microbes to survive. 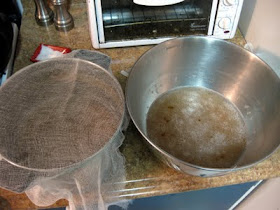 Ambient temperature is supposed to be the key indicator for determining when the best time to capture wild microbes is. Wild Brews report that during the hot summer lactic acid bacteria is too prevalent for successful spontaneous fermentations (other people say Acetobacter is the issue). Hot temperatures also slow natural cooling, which allow thermophilic (heat loving) bacteria more time to thrive before the wort cools enough for yeast to ferment. Whatever the reason, most lambic producers take the summer off from brewing, so I decided to follow their lead for my first attempt. At the other end of the mercury, if the outside temperature is below freezing there may not be enough wild microbes to ensure a quick start to fermentation. Allagash only brews their "Coolship Series" beers in the fall and spring skipping the winter since it gets much colder in Maine than it does in the Senne Valley.

Most homebrewer who attempt spontaneous fermentations seem to report poor results from leaving the wort open during natural cooling for inoculation. With this method you are relying 100% on the microbes that happen to fall into your beer. To help reduce the risk of major off-flavors I decided to capture microbes in starters that I could propagate before pitching them into the wort. I made four pints of low gravity (1.030) wort from malt extract, 1/2 oz aged hops, and a pinch of yeast nutrient. I divided the hot wort into three metal pots, each covered with a layer of cheesecloth secured with a rubber-band (to prevent insects from crawling/flying/dropping into the wort as it cooled). I placed these starters to cool in my backyard (40-45 F), upstairs (60-65 F), and barrel room (55-60 F). 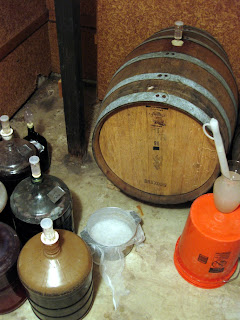 I was hoping that the aged hops included in the starter wort would prevent Lactobacillus from lowering the pH before the yeast was able to start fermenting. At this stage of the process aged hops are not strictly required because any bitterness fresh hops impart would be diluted before it reaches the main fermentation. With that being said, I still wanted to see what sort of character the lambic hops (3 year old Willamettes) that I purchased from Freshops last fall would contribute.

The following morning, with the wort cooled and hopefully teaming with life, I moved the three starters into bottles/growlers and left them at ~62 F. I did not give the wort additional aeration except for what it received during funneling. I also attached airlocks to reduce the chance that aerobic microbes would gain a foothold. I was torn by this decision because yeast cells need oxygen to reproduce effectively.

After a couple of days I observed the first signs of activity in all three of the starters (small krausens and a few bubbles through the airlocks). I left them alone for three weeks, enough time for the yeast and lactic acid bacteria to make enough alcohol and lactic acid to kill any enteric bacteria (like E. coli). I would skip tasting the starters at this stage, while no known pathogens can live in fermented beer that isn’t the case for unfermented wort. 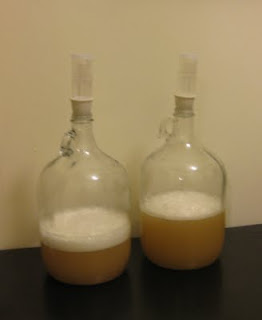 After three weeks, the "upstairs" starter had grown black mold on the surface of the wort and smelled rather foul (dumper). The “outside” starter had some white mold and smelled a bit spicy (keeper). The “barrel room” starter had no mold and smelled like over-ripe fruit (keeper). I took the two keepers and doubled their volume with fresh unhopped starter wort, and moved them to (sanitized) clear one gallon fermenters so I could see what was going on. Instead of an airlock I capped each jug with a piece of aluminum foil and I shook the fermenters every time I walked by to get oxygen into solution. Both started fermenting quickly and smelled pretty clean. The outside starter fermented a bit more rapidly and produced a mildly sulfury aroma, while the barrel room starter took its time and produced more fruity/funky aromatics. When fermentation slowed down I reattached the airlocks to prevent mold from reappearing.  After two more weeks both starters had developed a light lemony tartness.

Yesterday I brewed five gallons of a turbid mashed lambic, once it was chilled to 70 F I pitching about one quart of each of the starters (but more on that next week). It is going to be tough to wait more than a year to see how this one turns out.
The Mad Fermentationist (Mike) at 7:39 PM