Sometimes (despite your best efforts) a batch goes wrong, but being prepared you can still salvage it.  My Bohemian Pilsner failed to start fermenting after two yeast starters failed.  US-05 to the rescue, fermented cool, the result is surprisingly lager-like (it even needed a diacetyl rest).  I'll certainly try this recipe again in a few months with a few minor modification (and some healthier lager yeast). 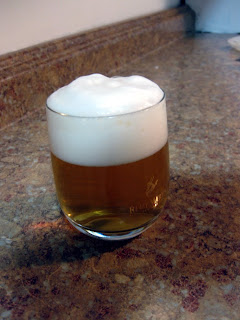 Appearance – The gold-yellow body is not quite crystal clean, but it is getting pretty damn close. The white head is sticky, tight, and long lasting.  The head is thick enough to stand up above the rim of the glass, perfect.

Smell – The aroma isn't as powerful as I expected, but what is there is right. Bready malt, slight sulfur, and a touch of spicy hops. It smells surprisingly clean and lager-like despite the ale yeast.

Taste – The smooth, rounded bitterness meshes well with the fresh maltiness (not biscuity or intense). Nice balance between bitter and sweetness, more in line with the Czech examples compared to some of the hoppier American craft pilsners. I'd actually take a bit more of the hop volitiles, although the hop character isn't too far off something like Pilsner Urquell.

Mouthfeel – Solid carbonation, but not quite as high as the style often has (I've had it off gas for a couple days while another beer is carbing...). The body is almost creamy, a great match for the flavors.

Drinkability & Notes – Despite the problems I had initially with the fermentation this beer turned out really well. Certainly the sort of beer I would have no trouble drinking in quantity, especially if it was a bit warmer out. Next time I would use the floor malted Weyermann BoPils malt, and go with an additional ounce of Saaz at the end of the boil.
The Mad Fermentationist (Mike) at 7:51 PM