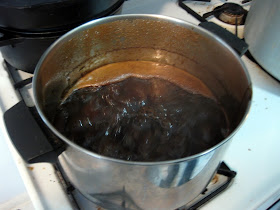 There are some style kinks that seem obvious, but are overlooked by craft brewers and homebrewers alike.  One of the "in" wrinkles the last few years has been making dark beers that don't fall in the standard porter/stout sub-categories; new styles (recognized or not) have emerged like Black IPA, and Belgian Stout.  A few months ago I had a bottle of Belhaven Scottish Stout and wondered, "Why didn't I think of that?"  The combination of a rich caramelly Scotch ale with additional roast seems so natural (compared to dark wits anyway), the roasty bitterness helping to counter the sweetness of a modestly hopped wee heavy and adding a smooth roast coffee complexity. 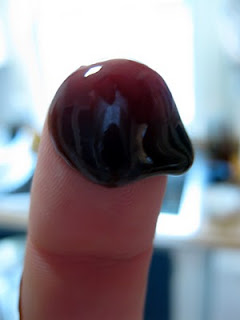 I've made Scottish ales (at both session and wee heavy strengths) always following the "modern" recipe scheme, getting the caramelized sugar flavor by adding crystal/caramel malts to the mash.  For this batch I wanted to take a more "traditional" route, using only pale malt (Maris Otter) and roasted barley, and relying on boiling down the first runnings to provide the caramel notes and residual sweetness.  My procedure was to take the first gallon of wort I collected and boil it on my stove while I continued to run off the rest of the wort for the main boil.  By the time the 75 minute main boil was completed the first runnings had reduced to three cups of thick sugary syrup (I had read the runnings should be boiled down to one cup, but at three cups the bottom of the pot was starting to char).

In true Scottish style the small dose of bittering hops will provide some balance, but allow the malt sweetness to take the lead.  I got slightly better efficiency than I anticipated due to the extra gallon of wort I collected to compensate for the two boils, the result was a starting gravity .010 higher than I had planned.  I pitched the Scottish Heavy strain from East Coast Yeast, but I'd suspect the White Labs or Wyeast  Scottish strains would be equally good choices.  The strain I used is supposed to be more attenuative (77-80%) compared to the other two (WLP028: 70-75% and WY1728: 69-73%), so you might want to reduce the mash temp by a few degrees to compensate if you use another yeast. 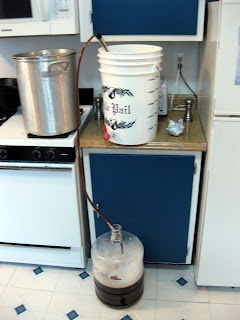 Mash pH 5.5 at room temp without any water adjustments.

Caramelized 1 gallon of 1.080 first runnings down to 3 cups or so. Slightly burned onto the bottom of the pot.

Collected 6.75 gallon of 1.043 runnings. A bit more gravity than expected considering that doesn't include the caramelized gallon.

Weak boil since I was low on gas. Added the caramelized runnings right at the end of the boil.  Chilled to 64 F. ~1/2 gallon left over in the bucket that didn't make it to the fermenter. Pitched the yeast straight from the vial, 2 weeks since production, and left at 63 F ambient to get fermenting.

4/20/11 Smooth roast, and a complex woody yeast character, happy with how this one turned out.

2/11/14 Brewed a similar recipe again, adding some Carastan to fill in the missing character.