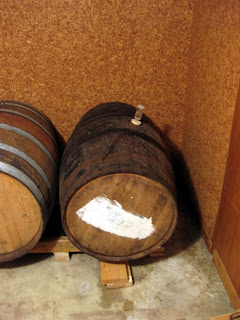 Our wine barrel solera is a week short of its first birthday (with a solid sourness and some woody complexities) so it seemed like a good time to start a second solera.  What is a solera? Will Meyers, the brewer at CBC, wrote an excellent article for New Brewer about his multi-barrel solera project that gives the background and history of the technique better than I can.

Nathan and I had been looking to procure something different than the red wine and bourbon barrels that we already have beers aging in.  Luckily, we were able to pick up a unique American oak barrel while we were in Pennsylvania visiting McKenzie's Brew House.  The barrel had already lived a long/rough life by the time we got it.  It was originally coopered and charred to be a bourbon barrel (I'm not sure which distillery since the name was painted over).  Bourbon is legally required to be aged in first use barrels, so after it was emptied it was sold to Laird and Company to age apple brandy (which they do for a minimum of 7.5 years).  Keystone Homebrew buys barrels in bulk from Laird's, so that is where the brewers at McKenzie's picked it up for ~$125 dollars. 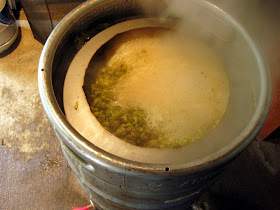 Spirit barrel impart an intense flavor onto beers compared to wine barrels. I have been disappointed by some apple brandy barrel beers like Captain Lawrence's Golden Delicious, which came across as hot/boozy with too much barrel character for its light frame.  On the other hand, I've tried some spectacular ones like Le Trou Du Diable La Buteuse Brassin Spécial, which is also based on a tripel (like Golden Delicious), but has a milder barrel character and some glorious funk. We wanted a sturdy base beer, so we opted for two sacks of pilsner, some Munich for bready malt character, and a bit of CaraMunich for aromatics (and some color).  We aimed for a substantial 1.075 original gravity, and a piddly 13 IBUs.  Hopefully the fact that McKenzie's had already aged a brown ale in this barrel will help to soften the booze character. 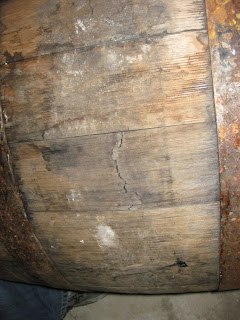 When we picked up the barrel we couldn't fill it immediately (holidays), I even failed to rinse it out.  When I did get around to cleaning it a few weeks later the gallon of beer left in the bottom smelled intensely vinegary.  Luckily a few rinses with cold water and a few days with 10 gallons of Star-San cleaned up the aroma completely.

Near the end of the brew day I noticed a large crack in one of the staves near the bottom of the barrel.  We didn't think that we had caused it, but we couldn't be sure. Luckily we had 5 empty six-gallon fermenters to hold the first batch while we contemplated our options (finding a new barrel?).  I applied some keg lube to the crack and put a few gallons of water into the barrel, it didn't leak so I added more every day until we trusted that the wood had swelled and could support 400+ lbs of beer.  We emptied the sanitizer and filled it half way with the first weekend's brew.  A few days later it was still holding, so we brewed/racked the second half of the wort in.  I was still a bit nervous, so we placed some wood boards under the barrel to help take some weight off the stave. 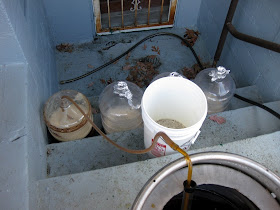 After the second brew the barrel was about 5 gallons short of being filled, so after primary fermentation was completed we topped off with 5 lbs of honey dissolved in water.  We haven't topped off our other barrels as evaporation and samples slowly drain them (and we probably won't here either), but we wanted to start it as full as possible to reduce the oxygen available to any acetic acid producing microbes still in the wood.

Hopefully next winter we'll be able to blend some of the two solera barrels together for a special cuvee. I did some updates on the solera aging spreadsheet I created last year if anyone is thinking of starting a batch of their own.

All of the Styrian Goldings added to the first runnings boil.

The 3 year old Willammettes were added to 5 gallons of final runnings and boiled for about an hour.

Discovered a crack in one of the staves of our Laird's Apple Brandy barrel from McKenzie's.

Pitched 2 gallons plus the yeast cake from the beer we brewed with McKenzie's along with the Bugfarm starter. Shook to aerate. Left to ferment at ~60 ambient in 4 carboys and a bucket. Gravity of first portion 1.077. Good fermentation after 18 hours.

10/27/11 Barrel seemed to be holding the 10 gallons of sanitizer, so we racked the first 25 gallons into it. The barrel smelled much fresher/cleaner than it had before.

Smooth brew except a boil over with the first runnings, lost ~1/2 gallon of wort. Added whirlfloc (which we hadn't added to the first half.)

Added 4 oz fresh Willamettes to the first runnings for the boil.

Ended up a couple gallons short of filling the barrel.

2/6/11 Added 1 gallon of final runnings from the Rye Saison.


2/11/11 Added 4 lbs of honey along with 4 gallons of water. Nearly at the top, but I'll wait to see how violent fermentation is before adding the last of the water.

12/11/11 Bottled 5 gallons with 5 oz of corn sugar, and 1/3 pack of champagne yeast. 5 gallons on 4 oz of Amarillo pellets. 5 gallons on ~6 lbs of blackberries, and 1 lb of mulberries. 5 gallons on 4 lbs of acorn squash (seeded skinned), and 4 g cinnamon and 2 g freshly grated nutmeg (although we pushed some of that out since it smelled so spicy). Full details on the pull and refill.

1/17/12 Bottled the dry hopped and squash/spiced portions with 5 oz of corn sugar and some rehydrated champagne yeast. Dry hopped smelled great, but I think we still over did the spicing.

4/11/12 Tasting of the dry hopped version, really happy with the combination of pineapple-lemon hops and sourness.

4/25/12 Tasting of the plain version. Every time I try this beer I like it a bit more. Similar balance to a good Flemish red, sharp acid, just a bit of sweetness, great barrel flavor.

10/4/12 Tasting of the spiced version. Pretty good, but it would be nice to get a hint of the squash. Next time age on the squash first, then add spices for the last couple weeks.
The Mad Fermentationist (Mike) at 5:50 PM