Sometimes a beer falls through the cracks.

My friend Stefin dropped by tonight to sample a few beers and pick up a culture of Brett Brux to brew something along the lines of my Session Brett Pale Ale.  He has a barrel of Lambic in his basement, but he's also a fan of bigger sweeter beers (brews a killer wee heavy), so I cracked open a bottle of the Wheat Triplebock I brewed in November 2008.  This particular bottle was from the gallon that was aged on .5 oz of bourbon soaked oak cubes.  When I looked up the recipe to see the specifics, I realized that I had never written a review of this chunk of the batch (and it's one of my favorite)s.  The oak tannins really help to cut through the big residual sweetness (FG 1.030), without getting in the way of the malt complexity.

Sorry for the delay. 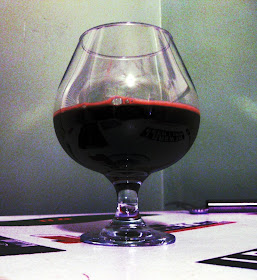 Appearance – Dark brown, with burnt orange highlights when held to the light. Tan head holds up for a bit, before falling to a thin wispy covering.  It is probably darker than most doppelbocks, but not too far off.

Smell – Plums, molasses, hints of alcohol, clean, but with a faint pleasant sherry oxidation starting to develop.  The aroma is really potent, with lots of complexity.

Taste – Sweet, without being sticky. Nice roast, slight espresso in the tail. Minimal hop bitterness. The flavor is very different than the aroma with not nearly as much dark fruit.  Expressive bready malt, a showcase for grain.

Mouthfeel – Not much contribution from the wood except some tannic roughness on the tongue. Moderate-low carbonation helps to accentuate the thick/rich body.

Drinkability & Notes – Somewhere between an English barleywine and a doppelbock, lots of complexity but still drinkable. The oak may not be obvious, but it helps to hold the sweetness in check.  Thanks to the Steve Berthel the brewer/owner of The Livery for spilling the recipe details on this one.  I'll have to brew it again soon since I'm down to my last three bottles.
The Mad Fermentationist (Mike) at 9:37 PM