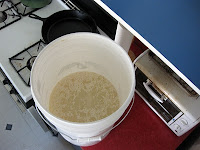 When we last left off I had just finished adding the final steamed rice and water infusion to my first batch of sake.  After that last addition I stirred the sake once or twice a day for the following six days.  This ensures that the rice, enzymes, and yeast are evenly distributed (allowing the enzymes to continue slowly breaking down the rice starches into sugars and the yeast in turn to ferment those sugars into alcohol).  All this at a lager-like ambient temperature of 50 degrees, which keeps the yeast calm and clean.  Wyeast recommends a minimum temperature of 60 for the sake #9 strain, but the fermentation was so intense at first that I should have used a blow-off tube even with two gallons of head-space.

After the sixth day of stirring I left the sake alone for an additional two weeks to complete fermentation.  With only a few days of fermentation left I raised the ambient temperature to 53 degrees to encourage complete fermentation.  At that point most of the rice had settled towards the bottom of the fermenter (with just a scattering of grains floating on the surface).

Two weeks after the last day of stirring I pulled a sample to check the gravity and flavor.  The milky liquid was slightly sweet with good body (from the suspended rice particles), the gravity was a shockingly low .994 (less dense than pure water).  Better to have a fully attenuated beverage rather than a sweet Mirin-like result.  It was a bit boozy, but for such a young/strong beverage it was actually pretty pleasant. 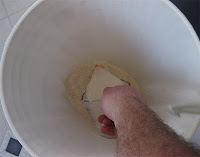 Two days later I had time to separate the liquid sake from the spent rice solids.  To accomplish this I had bought a nylon paint straining bag from Home Depot (the same ones some people use to filter hops out of their wort before fermentation).  Traditionally a cotton joso bag is used for this process, but this is a bit tougher to find (and it doesn't have an elastic band at the top to secure it to the bottling bucket).  With the sanitized nylon bag in place on my bottling bucket it was a simple task to scoop the contents of the fermenter into the bag.  I left the last pint or so of thick rice/yeast slurry in the fermenter (it seemed to be stuck to the bottom and I couldn't see any reason to bring it along). 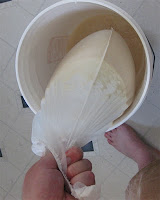 I then gathered up the bag and spent ten minutes squeezing (with my well sanitized hands) as hard as I could to extract as much liquid as I could.  The kitchen filled with the intoxicating scent of fruity esters and sweet, grainy alcohol.  The droplets of sake dripping back into the bucket had me a bit worried about oxidation, which might be one of the reasons sake tends to age poorly compared to beer and wine.  It strikes me that there must be a better methods of accomplishing the same result (but I can't think of what it would be).  I kept squeezing until the only thing coming out was a thick starchy liquid.  The rice goo left in the bag can be discarded (although there are apparently a few traditional uses for it). 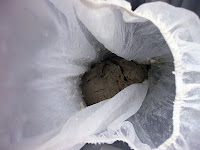 The result of my effort was about two gallons of super cloudy sake which I transferred into two 4 L jugs (plus a single 12 oz bottle that I tossed in the fridge for sampling in a few weeks).  The jugs went back into the fridge at 53 then I dropped the temperature to 40 to help it settle for a few weeks before packaging and pasteurization.

My plan at the moment is to bottle a portion cloudy (Nigorizake), let some settle and dilute with water to reduce the alcohol to ~11% so I can carbonate it, and add bentonite finings to the rest for clear full strength sake (Genshu).  It will be fun to get multiple end products from this batch, especially since it will allow me to compare the different sake styles from the same "mother" batch for comparison.

The sake was fianlly bottled and pasteurized a few weeks later.

5/22/10 The airlock had a bit of starchy sake in it and fermentation was raging after only 12 hours.

6/12/10 Scooped most of the sake/rice mixture through a nylon pain strainer into a bottling bucket. Left a bit of the most yeast/rice heavy sediment behind. Squeezed the bag until I collected slightly more than 2 gallons of sake. Seems like quite a bit of oxidation would occur. The final squeezes looked very milky/starchy. 2L put back at 50 degrees to settle out a bit, 1 bottle stuck in the fridge for samples.
The Mad Fermentationist (Mike) at 9:45 PM