I've really been enjoying my keg of Citra Pale Ale over the last few weeks, so I wanted to make sure to do a review before I kicked it.  I was aiming for a light, crisp pale-ale, something hoppy but still drinkable enough for 90 degree days.  It was also an opportunity to try out a hop I had never used before. 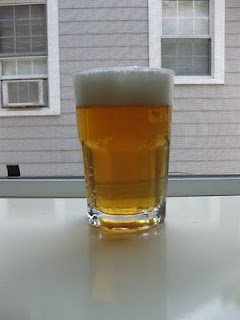 Appearance – Slightly hazy golden yellow, looks like summer to me. The head pours an inch or two thick (white and dense), but over a couple minutes it sinks to a wispy covering. Not sure if the low-protein corn adjunct contributed to the poor head retention.

Smell – For a single hop beer it has a very complex nose with loads of fruit (mango, orange, and apricot most prominently). There is a bit of pine, but it seems like Citra would be a good match for something like Simcoe that is more resiny.

Taste – Nice bright hop character, but not as dominant as it is in the nose. Moderate balancing bitterness, but not quite as prominent as I was aiming for (hop bursted beers often seem to have a milder bitterness than an IBU calculator would suggest). The finish has a nice toasty breakfast cereal note that I'll attribute to the Golden Naked Oats.

Mouthfeel – Moderate carbonation with a nice softness/creaminess that wouldn't be out of place in a stout. Very nice.

Drinkability & Notes – The bitterness combined with the relatively dry body makes for a crisp refreshing beer. I've taken to blending this one with a splash of my Golding Medal Bitter, to add a bit more malt depth and better head retention, but on its own it is a really solid pale ale. I'll have to add some Citra to the mix the next time I brew an IPA or DIPA.
The Mad Fermentationist (Mike) at 6:48 PM