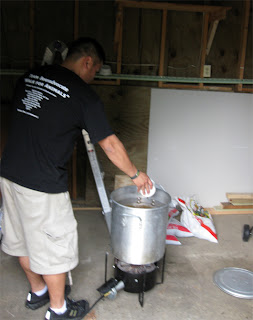 Orval is one of those beers that beer nerds love.  Dry, hoppy when fresh, funky when aged, complex but still drinkable etc... Bam Beer from Jolly Pumpkin is in the same realm, although it develops a bit more sourness as it ages and has a lower gravity/alcohol (much like the elusive Petite Orval, which may or may not just be watered down Orval depending on who you are talking to).  I combined the ideas of these beers to make a Brett spiked Belgian Pale that I'm hoping will be ready to drink in just a couple months.

The malt bill is pretty straight forward, mostly Pils with some Vienna for malty depth, and wheat malt for added head retention and a bit of body.  The hops were all Saaz, I even made an addition at 10 min (something I avoid in most funky beers) since I am only planning to let this one sit in secondary for two months before drinking.  I fermented it with the Belgian Ale (White Labs 550) and Brett B yeast cake from 1 gallon of Audrey's Amber. 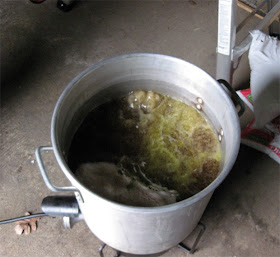 Unlike most funky/sour beers I mashed this one pretty low to just give the Brett a small snack, hoping for some funky/rustic complexity without letting the beer get too funky.  I want this to be a beer that will be ready to put on tap in late summer and early fall.

I may add some dry hops right before drinking, but I'll wait to see how the beer develops.

Batch sparged, run-off was a bit slow, but otherwise the brew was uneventful.

Added 2 g of gypsum to the kettle to boost the hops.

Chilled to 80 left in basement for 3 hours ~75 degrees. Shook for two minutes and pitched the remains of the 1 gallon of Brett B spiked Audrey's Amber.

Good strong fermentation after 12 hours. Looked pretty much fermented out after one1 week, but with a small krausen still sticking around.  Left aluminum foil on for the duration of primary fermentation.

1/13/11 The funk character overwhelms the rest of the beer pretty much.  Some malt shows through, should try the recipe again with a milder strain of Brett.
The Mad Fermentationist (Mike) at 6:14 PM