Returning home at 2 am on a Wednesday night could have seemed like a terrible idea, but after getting to try some of the most fantastic Gueuzes and fruit Lambics I have ever sampled, it seemed like a terrific idea.  Sadly in my hurry to get out the door, I left my camera (and raincoat) sitting on my bed (thankfully Ryan_PA sent me a few shots he took). 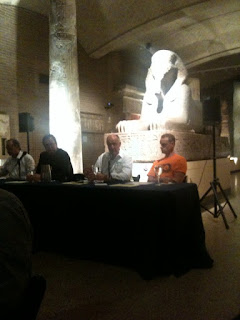 Alex, Devin and I were able to get to the UPenn Museum Upper Egypt Room right on time, just as everyone was getting settled in for the Lambic Summit (surprisingly we didn't hit too much traffic on the way up from DC).  The 2 oz samples were brought out one by one, with the brewers/blenders Frank Boon (Boon), Armand Debelder (Drie Fonteinen), and Jean Van Roy (Cantillon) talking about their beers in turn.  There wasn't much back and forth between the Belgians because the moderator (Dan Shelton, of Imported by Shelton Brothers fame) seemed more interested in giving his opinion than sparking discussion.

Here is a short list of notes that I scribbled on the flavor of the beers as well as some of the interesting things the men responsible for creating them had to say.

Drie Fonteinen Oude Gueuze (1999)
Soft, earthy, lemon rind bordering on mineral, really complex. The decade since this was blended as mellowed the sourness, leaving it only mildly tart.  Armand noted that this is one of his favorite blends.  To have a case of this...

Boon Oude Geuze
Urinal mostly, with a bit more sourness than the 3F, but not much. Frank Boon said their brew days last about twelve and a half hours, and the beer is 18 months old on average at bottling. Boon does most of
their aging in large oak tuns unlike the other two who use smaller barrels primarily. 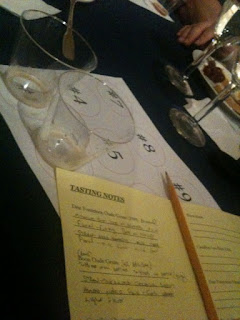 Closed nose. A bit horsey, with moderate sourness. Slightly mineral, but overall pretty clean. The keys to brewing good Lambic according to Jean are raw materials (they use only organic ingredients, except the fruit on some beers), time (lots), and patience.

Beautiful head for a Gueuze. Lots of lemon peel, dank, earthy, nice tangy sourness. Pretty aggressive oak character, one of the best I've tried. This was mostly 4 year old Girardin when it was blended in 2003, along with some 1 year old Lindemans for carbonation.  A special blend for a marriage, lucky couple.

Melted cherry lollipop with some butter. Sweet, really sweet. This is the cheapest line of Boon products, flash pasteurized and back sweetened with artificial sweetener (a modern variant of saccharine). There is a long history of sweetening Lambics (according to Frank some breweries used to use concentrated wort that was boiled down for 24 hours) but that doesn't make the beer taste any better.

Nice light barnyard (like the Classic) but with the addition of nice fresh cherry, and more oak. Slightly sweet, nut nowhere near the Boon. Jean suggested aging the beer 2-3 years to mellow the fruit character a bit. They use "wild" Schaerbeekse cherries in this beer, which I was unaware of (Turkish cherries are used in their regular Kriek I believe he said).  Lou Pepe is a colloquial term for grandfather. 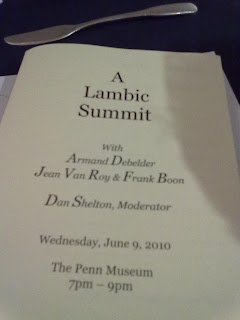 Wheaty with lots of overripe cherry. Nice hint of funk, but not as much as the Cantillon. Not as fruity as when I've had it before, maybe this is an older batch.  The discussion turned to the Schaerbeekse cherries used to make this beer, which are not as sour as American sour/pie cherries (this confirms a suggestion I heard a few years back to blend sour and sweet cherries to mimic the character of Belgian sour cherries).

The best of the three Boons. Nice bright raspberry flavor, and not nearly as sweet as the Kriek. They use ~330g of fruit per liter of 7-8 month old Lambic. Frank likes Framboise young, although I've had some excellent old bottles of old Rose de Gambrinus (which incidental was brewed with a blend of raspberries and cherries until 2004-2005 when they switched to Hungarian raspberries which have more color than the old Belgian raspberries).

This had a fantastic spicy nose that at first I thought was fresh wood until Jean said it was from the grapes. The Pinot d'Aunis grape is usually used in wine blends, seldom on its own. It would be great to see this one done on a larger scale (Vigneronne uses Italian grapes while Saint Lamvinus uses French grapes). Cantillon has recently started experimenting with frozen fruits, which allows them to stagger production a bit more instead of having to deal with the glut of fresh fruit towards the end of summer to add to their beers (and the glut of bottling the follows 2-3 months later).

Lots of dank basement oakiness, very mild grape character (and subdued in general). Rather tannic, but a good balance for one of the sweeter 3 Fonteinen beers of the night (Armand thought it was pretty strong alcohol wise due to the addition). This was a rarity also because it was made with 100% Lambic brewed at 3F, with 60L of the Tuscan red grape juice added per barrel (if I heard correctly).

Cantillon LH12
This one was aged for 61 months in used Cognac barrels in the "optimal" part of the cellar where the temperature and humidity are perfect. It had a big Cognac/wood/barrel character and a nice sharp, lightly-acetic, base (after that long I was surprised there wasn't more earthy/fruity funk). Virtually no carbonation, this was unblended straight from the oak. 50 Degrees North 4 Degrees East was a similar release, but was blended and contained beer that spent only 2 years in barrels.

Spirit'Armand (Drie Fonteinen Distilled Gueuze)
Sharp and boozy, but I got just a hint of Gueuze fruitiness. I'm not a big fan of hard liquor, but there is certainly a chance that this could be refined into an interesting beverage.  It was made from heat damaged Gueuze that resulted from a thermostat malfunction at the warehouse. The short video below is of Armand talking about it (again thanks to Ryan).

Sadly the nitty-gritty of wort production, inoculation, aging etc... wasn't really touched on.  The questions from the audience tended to be on pretty bland subjects (one person asked three times about why there are beers labeled Oude Kriek, but not Oude Framboise... Government red tape).  There was also too much discussion about why Cantillon isn't part of HORAL (Jean doesn't want to be part of a group started to protect traditional Lambic brewing with breweries that do mostly sweetened Lambics). The importer for Boon beers also wanted to rehash whether or not the awful Boon Kriek had artificial sweeteners in it (who cares when a beer is that unpleasant to drink?).  Apparently the better/unsweetened Boon Lambics only just got import approval, so they weren't available for this event (to contrast that Jean mentioned that several of the Cantillon beers served "Do not exist.").

One of the more interesting topics was what the three breweries had to do during the lean years of Lambic sales to stay in business.  Cantillon opened their museum, Drie Fonteienen opened a restaurant, and Boon made more commercial products.  It shows just how poor the market was for these beers as recently as 20 years ago, it was also nice to hear all of them express appreciation for the enthusiasm (deep pockets) of American beer lovers.

Jean mentioned that he really enjoyed a rhubarb lambic (Zhwanze 2008) that he had made, seems like something worth a gallon test batch (although I didn't care for Haandbakk).  It was great in general to hear that there is still that drive for experimentation and improvement, not just reliance on tradition.

After the three hour event we made a quick stop at Monk's Cafe for samples of Lost Abbey's Duck Duck Gooze (their take on a Gueuze) and Veritas 007 (Duck Duck Gooze aged on Cabernet Franc grapes from what I understand) before heading back to DC.  Both beers were excellent, but not as good as the Belgians.  The DDG had some interesting funky complexities, and a nice bright acidity that wasn't too heavy handed.  The Veritas was more acidic, with the subtle wine character mingling nicely with the fruity complexities of the base beer.  It was terrific that Monk's was only charging $6 a tulip for these two when bottles go for $30 at the brewery and several times that on eBay.  They had some stronger/darker beers on as well (Angel's Share and the Bruery's Melange #3), but after a night of light/tart beers a sip of each was more than enough for me (sadly Oude Tart from the Bruery event the previous night had kicked before we arrived).

A very inspiring night indeed, time to start a renewed effort at making my own blended sour beers.
The Mad Fermentationist (Mike) at 9:04 AM