If there is one thing that homebrewing has taught me, it's patience.  It is amazing that our (sour) bourbon barrel aged "wee heavy" has already been relaxing in its oaky resort for more than a year.  In that time it has gone from a rich caramelly fresh beer to a sour, oaky, aged delight (although clearly not what we originally set out to make).  In a couple days we'll be repeating the efforts of our Flanders Red bottling day to prime and bottle the ~50 gallons of strong-amber-sour-beer.  It will be interesting to see how it tastes with some carbonation (assuming we find a yeast capable of dealing with the considerable alcohol and low-pH).

Once the barrel is empty we will immediately begin filling it back up with a new beer.  This time around the vote was to do something strong and dark enough to nearly be an Imperial Stout, if it wasn't going to be sour and funky.  Jolly Pumpkin's Madrugada Obscura was a big inspiration for the idea, although we were not in any way trying to clone it as far as the recipe goes.

The roasted character will be a bit restrained (9% dark grain), although if I was the recipe boss I would have reduced the chocolate/roast and added Carafa for a soft roasted character (I'm worried that the roast won't seem smooth once the resident bugs and critters lower the FG).  We also wanted to keep the IBUs low so the bitterness doesn't clash with the sourness.

We kept the recipe pretty simple (as we usually try to), with complexity coming from the different malts we each chose to brew our batches with (not to mention the bugs and the barrel): 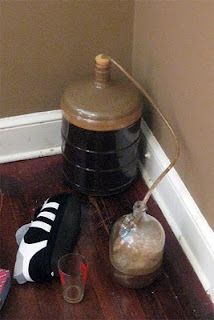 90 minute boil with 25 IBUs of a clean hop near the start of the boil.

This batch will get the same treatment as the Wee Heavy, clean primary fermentation by each of the brewers, followed by about a year in oak with the microbes now living int eh barrel, the specific time will depending on how the flavor and gravity progress.  Most likely the oak character will be lower in this batch than the Wee Heavy since the first beer probably pulled out a good deal of the wood's character.

3/20/10 Racked into the bourbon barrel in Nathan's basement on top of the last 2 gallons or so of  slurry from the wee heavy.

5/18/11 Despite its short time in the bottle it is already drinking well, great blend of coffee, vinous, tart, sweet.  Excited to see where it goes in another year or two.

6/27/11 The cherries add a wonderful secondary dimension to the vanilla of the barrel, really happy with how this one turned out.