What I have sitting in front of me is a glass of quite possibly the first sour beer ever dry hopped with Citra (the variety Sierra Nevada uses extensively in their Torpedo Extra IPA). There is no way to be sure of that claim, but at least I'll guarantee that it's the first Citra dry hopped, butternut squash, sour beer... really stepping out on a limb there...

I got the idea for combination after the great results I had with the bottle hopped Flanders red (Amarillo and Cascade). In that beer the citrusy character of the hops really complimented the bright acidity and slight sweetness of the base beer. This sour/brown is pretty similar (big acidity, but still some malt, and no aggressive funkiness) I thought a hop like Citra would have the same magical effect.  I also thought it would be a good way to get a sense for a hop I had never used before, still not sure what I'll do with the other 4 oz I bought (maybe a hoppy American red?). 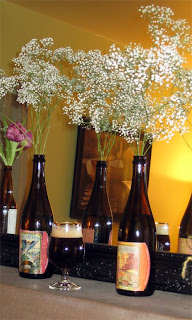 Appearance – Nearly opaque, ruddy, dark-brown.  One of the problems with bottle hopping is that it makes pouring the beer more difficult (the hops tend to clog the neck of the bottle) which makes keeping the sediment at the bottom of the bottle difficult. The thin tan head has moderate retention and lacing.

Smell – Nice citrus/orange nose with some tropical fruit (mango?) and pine, as well as some dank/herbal notes.  The hop character has deteriorated a bit over the last few weeks (those dank notes are new), it has now been in the bottle for about 5 weeks.  There is certainly a sour/funky note to the aroma, but the hops cover up the nuances.

Taste –  That bright/sharp acidity kicks off my first sip with a bang, but it seems mellower after that.  The finish is a bit yeasty/muddy, I really need to find a better way to dry hop sours.  I'm really happy with the combo of Russian River and New Belgium microbes in this one, plenty of acidity with a gentle funk. One of the sourer beers I've made, but there is a bit of sweetness to help balance it out.  Not too suprising that the squash and spices are nowhere to be tasted.

Mouthfeel – The acidity really puckers, but there is still some body to balance it.  The carbonation is moderate (bottle hops give nucleation sights for bubbles, so I'm interested to see how the non-bottle hopped version compares).

Drinkability & Notes – Tasty, but I need to be more careful pouring these bottle hopped beers to avoid getting so much yeast (I should also be quicker on the draw with these hoppy sour reviews).  Looking forward to cracking open some of the "regular" version of this beer soon as well.  Nice way to relax after spending my evening brewing a hoppy English ale.
The Mad Fermentationist (Mike) at 9:12 PM