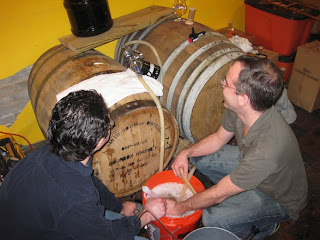 These days some of my brewing projects make me feel like I'm working at a small brewery rather than just enjoying the "hobby" of homebrewing.  For example, this past Saturday when our group of DC area sour-heads got together to bottle 45 gallons (~18 cases) of sour bourbon barrel aged wee heavy, then filled the barrel back up with 55 gallons of strong porter.  Moving around 100 gallons of beer in a day certainly doesn't feel like operating on a homebrew scale.

Compared to our first barrel bottling day, our little group of homebrewers is getting to be ruthlessly efficient, completing the whole operation in under five hours (including a couple breaks for beer and pizza).  The general strategy was to break into two teams; one transferred the beer out of the barrel, primed it with corn sugar (aiming for 2.2 volumes of CO2), and dosed it with rehydrated champagne yeast; and the other sanitized the hundreds of bottles, then filled them with beer and capped them.  Other than a pump to speed the transfer of beer out of the barrel, and a postal scale to ensure accurate measurement of the wort before priming/reyeasting we used pretty standard equipment (bottling buckets and wands, bench cappers etc...). 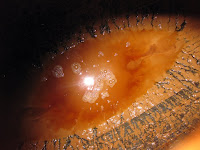 The final gravity of the beer was a bit higher than I expected at 1.014, but considering the original gravity was just shy of 1.100 this beer is right around 11.5% ABV.  It has been surprising that we have yet to see the hyper-attenuation that I usually expect from sour beers (most on my regular 5 gallon batches end up under 1.005).  The combination of sourness, high alcohol, and a touch of chocolate malt should make this beer a perfect candidate for aging many years.  While I'm looking forward to seeing how it evolves over the next decade, at this stage I'm just hoping all that alcohol and acid doesn't prevent the yeast from being able to carbonate the beer. 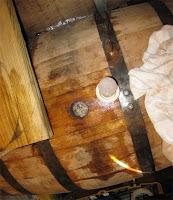 The bourbon character of the beer at bottling was a bit more potent than I ideally wanted, but it should slowly mellow as it ages in the bottle.  The balance was perfect when we tasted it a few months back, but it took time to get the eight of us to all brew our batches, ferment them out, and decide on a day we were all free to get together.  Being able to fill a barrel on short notice would be one of the biggest advantages of having a larger scale brewing system. 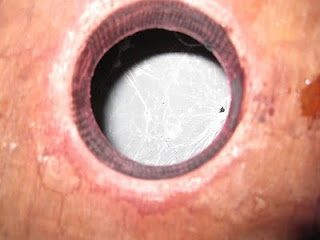 We took a break from the frenetic activity to try a sample of the second beer aging in our wine barrel, a pale Belgian beer inspired by Russian River's Beatification Batch 001/PH1.  After 4 months in the barrel it has improved greatly, the sulfur character it had when it was young has mostly cleared up, and the sourness is starting to come around.  The coming summer heat should spur the lactic acid bacteria to really sour it up.  It will be interesting to see if it gets ropey/sick like the Flanders Red that spent last year in that barrel.

Speaking of which, I brought a force carbonated sample of the wine barrel Flanders Red that I have been aging on sour cherries for the last few months.  It is just about ready to bottle since it has a nice cherry character, bright sourness, and beautiful balance.  Nathan (whose basement houses the barrels) was racking half of his share of the sour wee heavy onto sour cherries, should make for an interesting combination along the lines of Lost Abbey's Cuvee de Tomme (strong/sour, bourbon aged, cherries etc...).

With all three of our barrels filled in the last few months there probably won't be much we have to do with any of them until late in the fall at the earliest.
The Mad Fermentationist (Mike) at 9:27 PM