Back in September I put together my first kegerator, and I've got to admit that I am now a convert to kegging.  I've enjoyed being able to force carbonate beer, fill any size glass (or just have a taste), and it really is much quicker/easier than bottling. However, I hadn't found a good way of letting my friends know what beers I have on tap (besides just telling them and pointing). I had considered getting a small chalkboard or white board to put on the wall next to it (as many homebrewers do), but that didn't seem like enough fun for me. 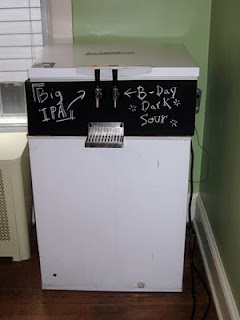 After using a can of chalkboard spray paint to refinish an old chalkboard that my girlfriend bought from someone on Craigslist, I had the answer to my dilemma.  So I took the collar off the kegerator and sprayed the front with two coats of the paint an hour apart.  After 24 hours the surface was ready for me to chalk the names of the two beers on tap.  It is functional, and I think it looks pretty cool/unique.

The new labels came in very handy for my housewarming/birthday party over the weekend.  I still had plenty of my "Pound of Hops" IPA on tap, but I kicked the keg of Hoppy Saison a week back.  It seemed like a waste to have a two tap system with only one keg, but I didn't have any other batches ready to drink.  So I decided to blend some bottles of homebrewed beer to make a special dark sour cuvée.  After some small scale tests I settled on a six pack each of my Sour Squash (big acidity, not much funk) and Big Funky (strong, some oxidized dark fruit, no carbonation), and one 750 ml bottle of my Adam clone to add some richness and a hint of peat.  The blend was a big hit at the party, combining the best aspects of the three beers to yield a sour, but balanced beer with lots of dark fruit complexities.
The Mad Fermentationist (Mike) at 9:08 PM