Despite being BJCP certified and the Competition Co-Chair for DC Homebrewers I've never been too enthusiastic about entering my own beers into competitions.  I only do it about once a year, most contests put too much focus on brewing to style, and not enough on innovation and creativity (which is what I'm really interested in).  That said, for the first time this year I decided to enter a few of my beers in the National Homebrew Competition.  I've taken a couple medals at the Spirit of Free Beer which draws entries mostly from the Mid-Atlantic, so I thought it was time to take on the rest of the country (although as a resident of DC in the first round of the NHC I'm only up against KY, MD, OH, VA, and WV).

I chose six beers to enter, including four sours since that is what I'm most proud of (there were only 160 entries spread over 10 regions last year).  The fact that the NHC only requires 1 bottle per entry made it easier to enter some of my favorite batches (as you can see I don't have many bottles in my cellar...). 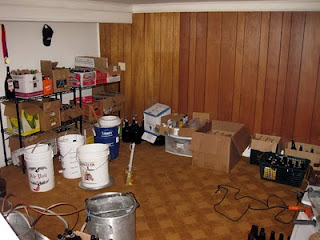 My entries:
1. My most recent batch of Berliner Weisse, which is tart and spritzy, but might be a bit too sour for the style, although that is what I thought about my first batch and it won me my one and only gold medal.

2/3. The Wine Barrel Flanders Red, which I think is one of the best beers I've had a hand in brewing.  I also entered a bottle of the sour cherry aged version in the Belgian Specialty category.

4. Weizenator, which I think will do well in the Weizenbock category despite my unconventional use of Extra Dark English Crystal for most of the color.

5. Wheat Triplebock, which took a silver a year ago at the SoFB as an Eisbock and has only gotten better.  It wasn't actually eis-concentrated, but it's too strong and dark to enter as a Doppelbock.

6. Just for fun I entered a bottle of Sour Squash, although I doubt it has enough butternut squash or spice character to do well in the Spice, Herb, or Vegetable category.

I'm certainly not expecting to win the Ninkasi Award with beers that weren't brewed with the style guidelines in mind, I'm just hoping to have a beer or two sent on to the second round of the competition (last year just better than 1 in 7 beers advanced).

I considered entering the terrific batch of IPA I brewed a couple months back, but the hop aroma is already starting to fade, and IPA is always one of the most competitive categories.  There were some other beers I considered entering, but at $9 an entry (even as an AHA member) plus shipping to Ohio, it didn't seem worth it.  On a side note, it is sort of weird that I have to ship my entries to Ohio when Philadelphia (6 hours closer) is one of the judging sites.

I guess it will be about a month before I get my scores back, hopefully FedEx gets the bottles to the competition unharmed and I get some judges who like sour beers.