Thursday was the DC Homebrewers inaugural Cherry Blossom Competition.  Inspired by the annual blooming of the Cherry Blossoms here in DC each entry was required to contain a flower derivatives other than hops (entries used jasmine, chamomile, honey, vanilla, and cloves among others).  The competition entries were divided based on the meta-categories from the Austin ZEALOTS Homebrew Inquisition.  Since the Cherry Blossom Competition emphasizes weird ingredients it didn't seem worth judging the beers in accordance to the BJCP classic styles, we just wanted to split the entries into flights of similar beers and have people judge them based on their enjoyment. 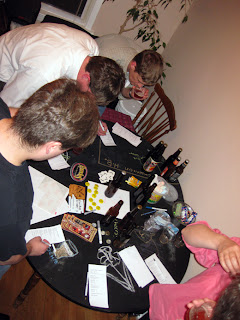 Everyone who attended the contest judged one of the three flights in the first round (ensuring that no one was judging their own beer).  The best of show round was judged by members who either didn't enter a beer or didn't have their beer advance.  For scoring we used a modified version of Charlie Papazian's score sheet from the Complete Joy of Home Brewing with some points allocated for "flower" aroma and flavor. We left how the winners were picked up to the judges, in the first round each table filled out score sheets for the beers in their flight, but each one ended up just discussing which two beers to send on.  During the final round though the judges decided to use a straight average of their scores to pick the winner (ranking the beers 1-6 ended up being too hard to do by consensus).

I entered my Honey Wheat Sour Flower (brewed long before the contest was proposed, but the orange blossom honey and chamomile made it a perfect fit).  It ended up getting fourth place, which I was pretty happy with considering sour beers aren't for everyone.  Scores from five of the six best of show judges ranged from the high 30s into the mid 40s out of 50, while the sixth judge gave me a 13 (it was the first sour beer he had ever tried).  That is one of the problems with a hedonistic rating system, it is hard to argue against someone who just doesn't like the flavor of a beer. 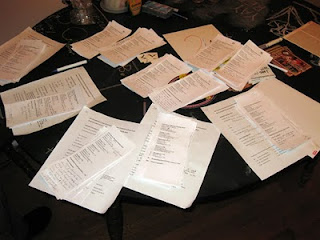 It was really interesting to try the other entries, one thing that really annoys me about most competitions is that you never get to taste the other beer to see what you were up against.  Overall I thought the beers were very good, and the first and second place beers were my two favorites (so the judging worked well from my point of view).  The second place beer (which I actually thought was the best) was a wit with 2 oz of hibiscus flowers (jamaica) added along with the usual coriander and orange peel with 15 minutes left in the boil, it was light, fruity, and slightly tart, very refreshing.  The winning beer was a clove dunkel weizen with 1/4 tsp of whole cloves in the boil and another 1/4 tsp added to the primary after fermentation, it was very good but the clove contribution was slightly more aggressive than I would have liked (we were drinking the beer less than 3 weeks after brewday so the clove character may mellow a bit with additional time).

The club is planning on holding this as an annual event each March, it will be fun to see how the entries evolve over time as people figure out which flowers/techniques work and which ones don't. The next contest up is the second annual Iron Mug where each brewer receives a secret ingredient(s) two months before the contest to be included in their batch (the first year white wine concentrate and woodruff were the required ingredients).  The contest is held between DC Homebrewers and the Wort Hogs club of Northern Virginia (we hope to avenge our loss last year by winning this time around).  The club is still trying to come up with ideas for two more contests each year, if your local club runs does anything interesting/unique please post about it in the comments.
The Mad Fermentationist (Mike) at 2:25 PM