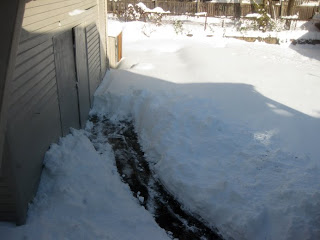 About a month ago, the Saturday before Christmas if you want to be precise, DC was hit by the biggest snow storm since I moved down here in 2006.  The next morning I took my shovel and carved a path through the snow from my backdoor to the garage so I could brew up a batch of something strong and dark.

I wanted to create something inspired by the most interesting new Belgian brewery to open in the last ten years,  De Struise Not only are their beers unique, but pretty much everything I have had from them has been darn near perfect.  While Black Albert, their Royal Belgian Stout, is the beer that garners the most hype, I think their best offering is a slightly sweet, spicy, Belgian Strong Dark called Pannepot (Old Fisherman's Ale). 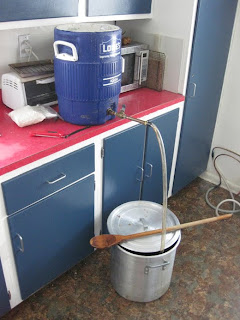 Luckily for me Struise had PDFs posted on their website (that have since disappeared, but can still be grabbed using the Wayback Machine, translation required) that listed the ingredients used in each of their beers as well as the color/gravity/IBUs, making a clone recipe pretty easy to piece together.

My version of the recipe starts out simple enough with lots of pils malt.  I was inspired to use a blend of German, Belgian, and French pils by an interview I heard with Ron Jeffries (of Jolly Pumpkin) on the Jamil Show, in which he said that uses a blend of different base malts to hearken back to the days before consistent malt modification and to provide a more balanced malt foundation.  On top of the base malts I used some Crystal 120 (I would guess that the original uses Special B for its "Caramel mout", but I didn't have any on hand), a touch of dark malt (a blend of Carafa, Chocolate, and Coffee malts), and some dark candi syrup.  Pannepot also contains a bit of flaked corn to boost fermentability, which I also used awhile back on my Big Funky.  The hops are pretty restrained at less than 30 IBUs for a 10% ABV beer, so I didn't mind swapping Willamette and Saaz in for the Bramling Cross and Hallertau Mittelfruh called for.

For yeast Struise uses T-58 (a dry strain that seems to be gaining in popularity), but I had some Wyeast 3787 around (which is very similar) from my Clear Sugar Experiment, so I decided to use that instead.  I was able to dig up the fermentation schedule for Pannepot posted by one of the brewers (reproduced at the end of the post), but I am not sticking too it very closely. 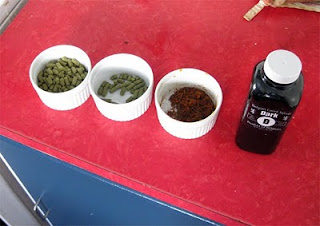 The big twist compared to other Belgian Strong Darks (Quadruppels) is the spicing: cinnamon, coriander, thyme, and orange zest.  Each spice/herb seems like it could pair with the other three individually, but I will be interested to see if they all four meld harmoniously in the finished beer.  I used a light hand with all of them, so worse comes to worse they will probably be playing around below the flavor threshold (which is fine since Pannepot does not have distinct notes from any of them). 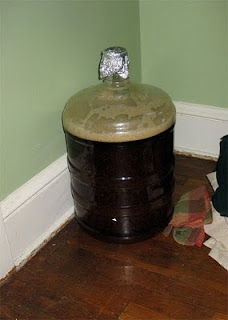 A few years back one of my first sour beers was inspired by Pizza Port's (now Lost Abbey's) Cuvee de Tomme, a strong dark Belgian aged in bourbon barrels with sour cherries and several strains of Brettanomyces.  It turned out to be one of the better batches I have made, so I though I would give the same treatment to half of this batch.  The base beer is pretty close to what I used back then, with some dark sugars, and a touch of dark malt.  Other than the base beer the biggest change compared to last time was the switch I made from dark sweet cherries (all I could find at the time) to sour cherries (which are used in the commercial version), hopefully this change will up the acidity and complexity of the beer.  It will be interesting to see if any of the spices are apparent after the fruit/wood/bugs have time to impact the beer (Struise uses the same blend of spices in Aardmonnik - Earthmonk, a tasty Flanders Red/Bruin, so I do have high hopes). 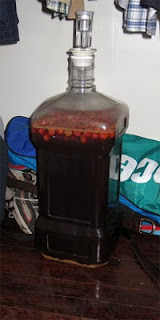 For the microbes I added the last of the Wine Barrel Flanders Red culture (which started out as Wyeast Roeselare Blend and the dregs from a bottle of Lost Abbey's Red Poppy) that also went into my Sour Cider a couple months back, as well as a touch of Al B's Bugfarm #3.  Normally I like the add the bugs in primary, but in this case where I wanted to leave half the batch clean I had to wait until secondary.

In slightly related news I think I accidentally drank the last bottle of my first Cuvee de Tomme inspired beer a few months back, I need to come up with a better way to inventory my batches so I know how much I have left.

Could have sworn I had Special B on hand, but I couldn't find it, Crystal 120 is close enough.

Half candi syrup added to pot during sparge. With that sugar, 7 gallons of 1.062 wort collected. Second half of candi syrup added with 20 min left. Not sure if this will do anything, but I do seem to get more dark fruit from earlier additions, and more caramelized sugar from late.

Chilled wort to 70. Yeast cake from 2 of the 5 jugs of the white sugar experiment. Pitched while giving 80 seconds of pure O2. Left at ~63 ambient for fermentation to start. Moved up to radiator after 24 hours to get it up to 75 degrees.

1/07/10 Racked 2 gallons into two 4L jugs, placed in the basement for a few weeks of cold conditioning before bottling.

The rest of the batch racked onto 2 lbs of local sour cherries that I had vaccupacked/frozen during the summer. It got the remainder of the dregs from the Wine Barrel Flanders Red, as well as a touch of Al B's Bugfarm #3. ~1/2 oz of bourbon soaked oak as well as 1/3 cup of Maker's Mark that they had been soaking in was added as well. Left upstairs at ~62 degrees to get the bugs/yeast working on the cherries. Should be ready to bottle next winter.

4/24/10 Bottled the plain half with 1.5 oz of cane sugar.  Aiming for medium carbonation.  The cherry half is still fermenting.

1/27/11 The sour/cherry version turned out well, nice cherry character, well balanced.  Not as sour/funky as I wanted, but I'm not surprised since I waited until after primary fermentation to add the bugs (and the base beer was more fermentable than I was anticipating).
--------------
Notes on Pannepot:
Old Fisherman's Ale is a dark ale brewed with spices. Pannepot is a term that describes the Fishing Boats from the village of De Panne. Brewed and bottled on the Deca Brewery in Woesten-Vleteren.
EBC:99, IBU:27, OG:1100, FG:1025, ABV:10%
Hops: Bramling Cross, Hallaertau MF