I was reading an article in the New York Times back in May about miracle fruit, a berry that has the ability to trick taste buds into interpreting sour as sweet, when I immediately thought "should be interesting with a sour beer." If eating this berry can make lemons, limes, taste like sweet candy, what would it do to a Kriek or a Gueuze? 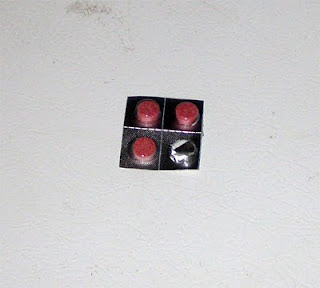 I had two options for berry procurement, fresh or tablet.  You can order either form online, but the fresh berries are extremely perishable (must be consumed immediately or frozen) and are pretty expensive due to a high minimum order ($44 for 20) plus expedited shipping.  So I went with tablets, I got mine from Think Geek ($15 for 10), my friend Tracy Jill had coincidentally just brought some from Amazon, the boxes looked different but the tablets inside were identical.

I thought trying miracle fruit would be a fun group activity (more foods/beers to sample and people to discuss the experience with), so I convinced eleven friends to come over for a Saturday afternoon tasting (with the stipulation that they each bring something sour to eat and drink).  After sampling some of the items to give us a "before" comparison we each took a tablet and let it dissolve on our tongues, which takes about three minutes (the tablets have a slightly sweet, mildly tangy flavor).  At that point the active molecule from the fruit (miraculin glycoprotein)  is ready to go to work playing with your taste buds (the mechanism by which it accomplishes this is still up for debate). 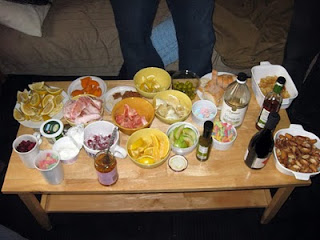 We started with the foods, the citrus was generally excellent (particularly the white grapefruit and Meyer lemons).  The tablet did not completely wipe out the sour sensation for me (particularly on the back of the throat), but it did a pretty good job making sour taste sweet. I also enjoyed the yogurt (which was wonderfully sweet and creamy) and the salt and vinegar chips, which took on a sweet barbecue like flavor flavor.  Several people even enjoyed a sip of distilled white vinegar, I was turned off by the sherry vinegar (which still had a strong vinegar flavor in my throat and aroma in my nose) and so skipped the distilled. The sour candy, olive, apricots, and Granny Smith apples didn't do much for me.

For some of the really sour things (lemons especially) my brain was confused if I was tasting something really sour or sweet.  I can only liken it to touching really cold water and for a moment not being able to tell whether it is hot or cold (just extreme).

Next we moved to the beers, which people had been generous enough to bring with them.  There were a couple beers that the tablet had little effect on (Sam Adam's Winter, Olde Towne Amber, and a couple homebrews), but the sour beers really did change considerably.

Cantillon Kriek - Still had a bit of an acetic sour edge despite the added sweetness.  It also smelled a bit like nail polish remover (which sadly is the same direction the Cable Car-Deviation starter went...). 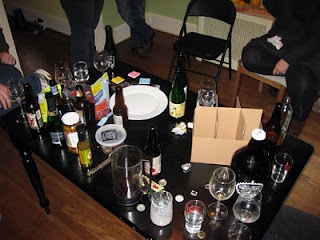 Lindemans Pêche - Tasted like the heavy syrup from a can of peaches, way too sweet for me to enjoy.

Selin's Grove Framboise - This is also a pretty sweet beer to start, but it didn't take on the aggressively sweet character with the miracle fruit.

My Sour Cherry Flanders Red - Came close to what a Lindeman's Kriek tastes like without miracle fruit, despite the high acidity of that beer normally.

Girardin 1882 Gueuze - This one was really enjoyable, no acidity, but it still had all sorts of complex earthy funk.

Gueuze Fond Tradition - Similar to the Girardin, but with more oak and fewer complexities.

Founders Breakfast Stout - There was quite a bit of debate on this one, most people didn't think it tasted much different, but several people thought it tasted much more like an iced mocha Starbucks concoction than it normally does.  I thought a few drops of lemon juice helped to add some sweetness to it and bring it more in line with what others were describing.

In general I enjoyed the Gueuzes over the fruit beers (but I won't say that any of them were necessarily "better" than they would have been without the miracle fruit), it would have been interesting to try some other styles like a Flanders Red without fruit, or something from one of the big American sour brewers, but after after 30-45 minutes the effects of the miracle fruit began to fade.  It was interesting to taste things again as they slowly regained their acidity.  We had all been impressed by the lemon kombucha when we first tasted it, but as our flavor trip wore off we realized that it hadn't actually been that sour to start.

It was certainly a fun way to spend the afternoon, and luckily no one complained of stomach issues, despite the assault of high acid foods in such a short amount of time.
The Mad Fermentationist (Mike) at 4:32 PM