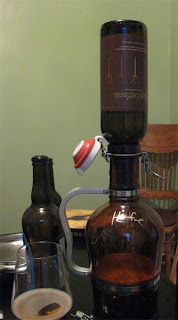 For several months, my friend Devin and I have been toying with the idea of fermenting a beer using the dregs from my bottle of Lost Abbey's Cable Car (a soured blend of Red Barn, Avant Garde, and Amigo Lager made for The Toronado) and his bottle of Russian River's Deviation (a blend of Beatification PH1, Orphan Ale (no idea), a newer Beatification, and Sanctification, bottle conditioned with additional Brett for Bottleworks).  Finally a few days ago we had the chance to get together to drink the two bottles, and pitch the dregs into a starter to get the bugs moving.

At this point we have not finalized the recipe for the beer that the starter will be pitched into, but we are probably going to do something on the light/pale side to allow the character of the fermentation to shine through.  Once the microbes from the dregs show some activity (which may take awhile since both bottles were a couple years old) I will be feeding them with another dose of wort to make sure there are enough cells for a healthy fermentation.  We will also be pitching some fresh ale yeast since I doubt much Saccharomyces is alive after so long in the bottle.

Opening the bottle of Cable Car also gave us a chance to see how my Cable Car clone, from two years ago, stacks up against the real deal. 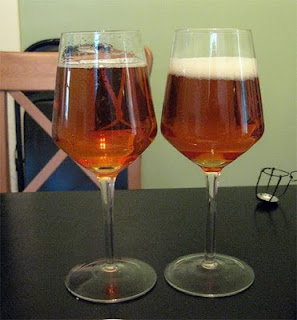 Appearance - Right off the bat the beers look nearly identical in terms of color and clarity, but mine (right) has significantly better head formation and retention.  We were shocked at how close the color was, which suggests that I probably constructed malt for the component beers bills pretty close to those of the originals. Both are pretty nice looking beers, but I think mine was the better looking of the pair.

Aroma -While Cable Car expresses a raw funkiness, with lemon peel, farmyard, earth etc... my clone is mellower with some honey notes along with a milder, fruitier (cherry/peach) tinged funk.  To get it closer I might back down on the honey malt and/or toasted malt if I ever brew this again (but I only used 2 oz and 6 oz respectively).  Each is aromatic and complex in its own way, but truth be told I would lean towards the Lost Abbey version with its more expressive funkiness.

Flavor - Certainly in the same ballpark, but Cable Car certainly has a firmer lactic acidity than my clone.  I wish I had added the microbes in primary instead of waiting until I blended the base beers.  Each has many of the same complexities from the nose (the original remains funkier, while mine is fruitier), but luckily the flavor of my version sheds the honey character from the nose.  Mine is probably the more balanced of the two, but I have to again side with the (tangier) commercial offering.

Mouthfeel - Similar, but mine has a bit more carbonation (which at least partially explains the better head retention).  Both are on the thin/crisp side, but neither of them is overly thin or drying.  I like a firm carbonation in a pale sour beer, so I would take mine on mouthfeel.

Drinkability/Notes - Both are easy to drink, and balanced, without any major flaws, they just don't strike the same balance. While certainly not identical I think I got just about as close as I could have without having access to the actual microbes and barrels that Lost Abbey uses. Not a bad effort at such a complex beer, and if I brewed it again I might be able to get even closer with a few minor changes.

So comparing the two beers I would say that mine wins on appearance and mouthfeel, while the Lost Abbey's takes it on aroma and flavor (the two most important categories), and they are tied on drinkability.  I'd certainly say it is worth brewing the clone if you've got the effort and don't have access to a bottle of the original.

Sadly the bottle of Deviation blew the other two beers away with more aromatic complexity, a deeper acetic tinged acidity, and better drinkability... sometimes I hate Vinnie.

Update 1/14/10:  Sadly the starter is smelling like nail polish remover... I guess the tinge of vinegar I tasted in the Deviation was a sign of some acetobacter that was just waiting for some oxygen to spring into action.
The Mad Fermentationist (Mike) at 2:21 PM