A month or so back I was lucky enough to be at a tasting where my friend Dyan opened up a bottle of Hanssens Mead the Gueuze. It was a very nice beer, a combination of lambic sourness and honey sweetness, with some of the inherent complexities from both disparate elements. My Funky Flower attained a similar result, but with a very different strategy since I added honey a beer as it soured rather than a blending of finished mead and gueuze.

Recently, I was happy to hear that the DC Homebrewers club is going to hold a homebrewing contest in a couple months to celebrate the annual early spring blooming of the cherry blossoms... with the stipulation that every entry has to use either flowers (other than hops) or honey in the formulation. It seems like this beer (with both honey and chamomile) will be a perfect candidate to enter into the competition. 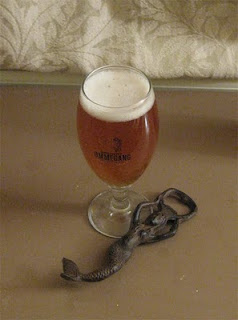 Appearance – Slightly hazy lemon-gold (honey colored?) with a thin, wispy white head. Some small streams of bubbles float lazily to the surface of the beer. A nice looking beer on first pour, but the poor head retention is a surprise given the large percentage of wheat and what looks like solid carbonation.

Smell – The honey component is surprisingly potent, provinding a beautiful floral-waxy scent. Certainly some hints of citrus (not sure if it is from the bugs or the honey). There is also a slight hint of smokey-phenol, probably from the wild yeast. Nice aroma, glad there isn't too much funk to interfere with the delicate honey notes.

Taste – Nice bright acidity, but it fades quickly giving way to some balancing sweetness (probably from they honey malt). The floral honey comes through in the finish, but not nearly as strong as it was in the aroma. There is some of that “young” sour wheaty/cheerio flavor that many of my beers develop during their first few months in the bottle, but in this case it is rather subdued. Not much from the chamomile, maybe just some juicy-fruit complexity, but I think that is alright.

Mouthfeel – Medium, with moderate carbonation, both of which suit this beer well.

Drinkability & Notes – A very pleasant beer, but it just doesn't have that special something to make it great (yet). At just about a year since brewday it is coming along nicely, but I think it needs more time to develop some more complexity. The lactic acid I added to this did it's job very nicely, although it does make me feel a bit dirty cheating like that. The portion aging on fresh cut white peaches is coming along nicely (huge fresh peach aroma), I'll probably bottle it in a couple weeks so it is ready for the summer.
The Mad Fermentationist (Mike) at 10:26 PM