Well a year has passed since my last tasting of the Courage Russian Imperial Stout clone I brewed back in July 2007.  The last year was kind to this batch, making it more drinkable while also giving it a boost in complexity.  I have been behaved and still have enough bottles for a sample each year until Christmas 2020 or so. 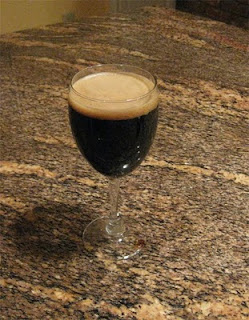 Appearance - Deep black liquid, a nice looking stout, nearly opaque with a hint of garnet at the bottom.  The thin brown head has surprising longevity and really enhances the appearance of the beer.  Hopefully additional age will not damage the head formation/retention.

Aroma - Big toasty aroma with bitter cocoa, dusty barnyard.  Once it warms there is a nice sweetness and just a hint of ethanol as it approaches room temperature.

Flavor - Lingering burnt coffee earth in the finish with the suggestion of burnt marshmallow.  Not much alcohol or bitterness smooth.  There is no negative oxidation, but a hint of coconut which is either from the oak, or some minor oxidation starting to set in.  It will be interesting to see how these components change over time.

Mouthfeel - Firm carbonation medium body, not quite as rich as I think a beer like this should be.  I am glad I didn't let the gravity get any lower before I stopped it with metabisulfite.

Drinkability/Notes - Very good but I bet it will be even better next year mellowed but concerned it might get too sweet as the hops continue to fade.  Looking back at last year's notes it doesn't seem like the changes have been major, which is a good sign for the long term stability of this batch.

Sorry for the extended gap in my posts, but I was up in Massachusetts visiting my family for the Christmas to New Years week.  I did get my hands on plenty of tasty bottles (for inspiration), and brought back down a couple cases of homebrew, now that I have the space to keep them down here in DC.  Hopefully this winter I will have time to revisit some more strong beers from years past to give an impression of how they have aged. 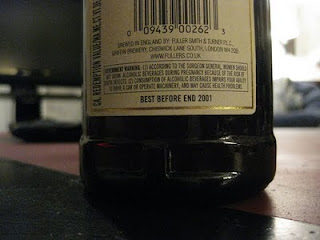 I also got a chance to drink a bottle of Fuller's 1998 Vintage Ale that my friend (and former partner in brewing) Jason and I had been sitting on for a couple years (Fuller's conservatively estimated that the beer was best before the end of 2001).  I'll only say that I hope my beer holds up as well when it is 11 years old, the dark fruit and port flavors were fantastic, marred only by a touch of papery oxidation.
The Mad Fermentationist (Mike) at 11:20 AM