It is rare that you taste a beer that combines sourness with hoppiness well. The general issue is that when you sour a hoppy beer the hops fade by the time the microbes do their work. There are a few notable exceptions, like the amazingly drinkable Cantillon Cuvee des Champions, El Rojo Diablo from Bullfrog, and New Belgium Le Terroir, their secret?  A minimally hopped beer that is dry hopped after it has time to age/sour. This is a great technique because it allows you to add a fresh hop flavor to a beer that has already had plenty of time to mature.

The problem is that if you dry hop a whole batch of homebrewed sour you'll either have to drink it quickly (the horror) or keep drinking as the hops fade and oxidize (the real horror).  A few years back I played around with a way to get around this when I bottle hopped some of my Mo Betta' Bretta clone. The results were good enough that I thought I would give it another whirl with the wine barrel Flanders red we bottled a few weeks back. I opted for four hop cones in each bottle (which sounds like a lot when you consider that it is equivalent to ~200 hop cones in a 5 gallon batch), one cone each Simcoe and Amarillo and two home grown Cascades.

The only real draw back from this method is that the beer will start to foam when you open it, so be prepared with an over-sized glass and some sort of strainer when serving. 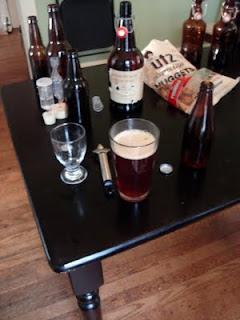 Appearance - Slightly murky, ruddy brown/red (what do you expect from all those nucleation sites). This bottle didn't gush nearly as badly as some of my other ones have.  The off white head pours pretty big, and sticks around for a good while.

Aroma - Big citrus (grapefruit especially) from the hops mingling with the fruitiness and funk from the bugs. At 6 weeks in the bottle (and on the hops) the hop aroma is just as fresh and alive as it was a month ago when I drank the first bottle (this one is my last).  The hops do cover up some of the subtle barrel/fermentation notes, but the added complexity is well worth the price.

Flavor - The hops almost seem to temper the sourness compared to the non-dry-hopped version (tasting soon). Big citrus remains with a touch of red wine fruitiness. No big funky flavors, but some hints of damp basement peak through from time to time.  The balance is the most striking thing to me, there is still enough malt and just a touch of sweetness to support the sourness, without being overly sweet like so many commercial Flanders Reds.

Mouthfeel - Still has a bit of heft to the body despite the Brettanomyces activity, but it is far from being a thick beer. Some of the carbonation was knocked out by straining the beer to remove the hops, but it is still adequately prickly.

Drinkability/Notes - Something about the combination is so quenching, but at the same time draws you back for another sip. This is one of those beers that no matter how slow I try to drink it I end up finishing my glass faster than I should. This might just be the best beer I have ever had a hand in brewed (I am now tempted to shove hop cones into some of the already carbonated bottles, but that could make quite a mess).
The Mad Fermentationist (Mike) at 5:56 PM