A couple years back I did two split batch sugar experiments (the original, the sequel).  They focused on the more interesting sugars out there, including unrefined sugars, caramelized sugars, and sugars from plants besides the classic sugar beet/cane (date, agave, and gur).  All well and good, but it left a big gap when it comes to how different plain/white/refined/pure sugars compare when used in brewing beer. The one "plain" sugar I try didn't get the same temperature controls and ended up tasting a bit hot/cidery.

Many Belgian beers, particularly the paler and stronger ones, get dryness (and a boost in alcohol) from the addition of relatively flavorless sugars.  For years Americans brewers (both home and craft) used the expensive and difficult to dissolve candi sugar rocks.  For the most part this changed a few years back when Brew Like a Monk was published with the claim that not only do brewers in Belgium not use candi rocks but also that the rocks are simply recrystalized sucrose (that is to say white table sugar).  As a result candi rocks and tablet sugar seemed like they would make an interesting head-to-head match, but I wanted to try some other options out as well.

A couple years back the company that imports an authentic and excellent dark candi syrup began importing a clear candi syrup that is partially inverted (supposedly making it easier on the yeast to ferment).  It hasn't gotten the same press/hype as the dark syrup, but I thought it was worth a try.  This is apparently what many Belgian brewers are referring to when they talk about candi sugar, so despite the high cost (~20X) compared to table sugar it might be the key to nailing sugar heavy styles like Tripel and Belgian Strong Golden.

Lastly the old priming sugar stand-by, corn sugar (glucose), seemed like a good candidate to throw into the mix.  The claim here is that much like the inverted sugar glucose is easier on yeast because they don't need to employ the enzyme invertase to ferment it.  In addition to these four experimental portions I wanted to leave one gallon as a control without any sugar to see how the gravity and flavor would fare compared to the rest. 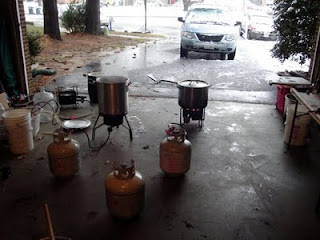 I didn't want to do anything too fancy with the recipe because if there are flavor differences they will most likely be subtle at best.  As a result I went with a base wort made from 100% pilsner malt, and a light hand with some Willamette hops near the start of the boil.  For yeast I went with my old friend Wyeast 3787 (Westmalle), fermented cool at the start and ramping up toward the end of fermentation to ensure complete attenuation. I brewed in my friend Scott's garage on a snowy Saturday in early December (he was brewing a porter on his system at the same time).  The brewday was relatively uneventful (aside from a tasty bottle of TPS Report, a GABF Gold Medal willing 100% Brett rose petal aged beer, from TriNity Brewing and a flat bottle of Lost Abbey Angel's Share that we had to sic my carbonator cap on).  I want to figure out given the standard homebrewer single-infusion process which sugar makes the best beer, so I skipped a protein rest despite the fact that it might have added some extra nutrition (FAN).  I did add some yeast nutrient as I usually do, which will help to make up for it though. 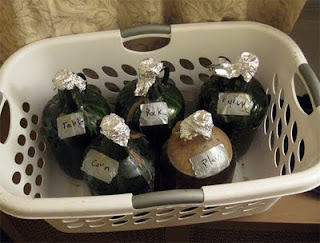 For introducing the sugar I wanted to balance suggestions to add it before fermentation to replicate the most common fermentation procedure with my concerns that having five separate aerations, pitches, fermentations etc... could introduce too many uncontrolled variables into my process.  I chose to inoculate the entire batch and leave it to ferment for 24 hours before adding the sugars (which I had weighed out so they would contribute the same gravity to each portion of the beer).  While only about 10.1% by weight the sugars (depending on the type) each account for 15.7% by extract, more than enough to get a good impression of impact of each variety.

I'll have a full tasting in a month or two after the beers bottle condition (of course using the respective sugars to add the fermentables for natural carbonation).

1.4 qrt starter made the night before with a 3 month old smack pack.  Not much activity as of brew day.

Water was treated with fish-tank chlorine remover, no other water adjustments as mash pH was ~5.2

Collected 6.5 gallons after batch sparge.  Solid boil.  Ended up a bit higher gravity than I was originally aiming for.  Chilled to 68, drove home, shook to aerate and pitched the starter into the 6 gallon better bottle.

I was a bit concerned about the yeast, so I placed the carboy in a pot and put it on the radiator overnight.  No action by the next morning, but soon after that the fermentation took off like a rocket.

Sugars dissolved in 8 oz of water, heated in the microwave to dissolve and sanitize.

12/17/09 Took off radiator to give time to settle before bottling.

3/10/10 First tasting.  Very similar, although the candi rocks came out a bit over-carbed.
The Mad Fermentationist (Mike) at 7:53 PM