After the tasting of the dry hopped version of our group's Wine Barrel Flanders Red, I thought it was only fair to give a review of the “plain version.” Needless to say I am floored by my first attempt at barrel aging, and can't wait to see how it develops with more time in the bottle (it was just bottled 6 weeks ago!).  The portion aging on sour cherries is tasting terrific as well, but it will be another few months before I bottle it.

On a side note I really like these Ivrig tasting (fine... wine) glasses I picked up at Ikea last weekend. They are perfect for swirling, and do a great job keeping the aromas in (and for $2.99 each, hard to beat). 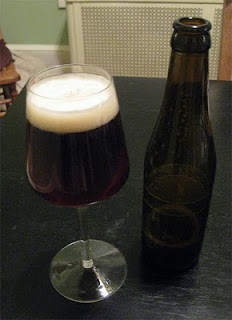 Appearance – One and a half finger slightly off-white head. The bubble structure is a bit open, but the retention is pretty good for a sour beer (that is to say not terrible). There is even a bit of lacing. Beautiful clear, amber-ruby-auburn colored liquid, a really stunning looking beer.

Smell – Some deep sour tones, but no vinegary (acetic) notes as most of the big name Flanders Reds have (not that I am complaining). Overripe cherries are the primary fruit note, and they are backed up by a wet earthy (borderline moldy) oaky basement aroma.

Taste – Just beautiful, deep (not not over the top) sourness balanced by just a touch of sweetness. The acid is lactic, but I get just a hint of the sharper acetic giving it a great lingering tart finish. The cherry character is not as big as it was in the nose, but it is still there bringing with it that same dank, earthy, woody complexity from the aroma. It is hard to tell just where the beer ends, and the wine character from the barrel begins. Much drier than most Belgian examples of the style (because we didn't blend in sweet young beer, or saccharin), and much less acetic than most American examples, both of which are fine by me.

Mouthfeel – Pretty thin, but there is still some residual body there. Not much tannin from the oak, I guess the wine stripped most of it out before we got the barrel. The carbonation is restrained, which I enjoy, but might be a bit low “for the style.”

Drinkability & Notes – It is remarkable what a few friends, a barrel, and some microbes can create in a year. I could easily drink a couple of these in a row.  Even without the opportunity to blend, I think this is better than 75% of the sours I have tasted from American breweries (although I might just be a little biased...).
The Mad Fermentationist (Mike) at 7:12 PM