For awhile now I have wanted to try out Wyeast 3711PC French Saison. I have sampled several homebrews and commercial beers that used it, and they have all had a great peppery character, and been dry but not thin. I had also heard that it is a monster compared to the fussy Dupont strain (WLP565/3724), which fails to attenuate well if it isn't given just the correct combination of plenty of time and heat. The saison portion of my Cable Car Clone for example stopped around 1.015 (75% apparent attenuation) after two weeks of fermentation.

The French Saison strain is supposedly from Brasserie Thiriez, probably one of my favorite 2-3 breweries in France (along with Brasserie Theillier and Brasserie De Saint-Sylvestre, brewers of Biere de Garde just about the only beer style France in known for). It is a bit surprising then that Thiriez specializes in the Belgian saison style, well not too surprising when you learn that they are just a couple miles from the Belgian boarder. For those of you who think France is a country of vineyards, you are pretty much right... but there are a few decent small brewers thrown in there as well.

Inspired by a bottle of Brasserie Dupont's Avril (a ~3.5% ABV saison); my initial thought was to brew this mid-summer when temperatures were hot and a light saison is the perfect thing to knock back. My plan was to do a split batch watering down half post-boil to make a light table saison for summer drinking and save the rest at full strength to enjoy during the warm DC fall. "Sadly" I ended up moving in August and didn't have the time to brew it.

The next iteration of my plan was to brew a big batch of wort with all pils malt and loads of Czech Saaz hops, then split it and ferment half as a saison and half as a pilsner. I had all the ingredients except the lager yeast, so when I got a surprise weekend brewday (while the Fermentationette was studying for her GRE) I decided to just brew it as a hopped up saison.

For the malt bill I kept it very clean and simple to let the yeast and hops take the lead. Mostly Belgian pilsener malt with just a touch of malted wheat for added head stability and a bit of extra body. You certainly could add a portion of a more characterful malt like Munich or Vienna, or even some sugar for dryness, but that isn't what I was going for on this one. 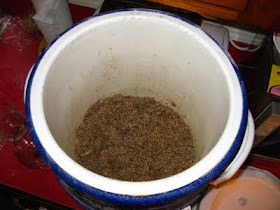 Saaz hops don't have much bittering power, but they give a great spicy character. I got a bunch for less than a dollar an ounce from Hops Direct, so I didn't feel bad using them for both early and late boil additions. 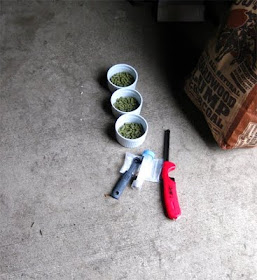 True to its reputation the French Saison strain tore through my wort in a week, taking it from 1.050 down to 1.002. Mind you this was a 3 month old smackpack without a starter, fermenting in my basement in November (although I did give it the benefit of a heating pad set to low after the first three days). Needless to say a few weeks later I gave it something a bit more complex to tackle... but more on that next week. 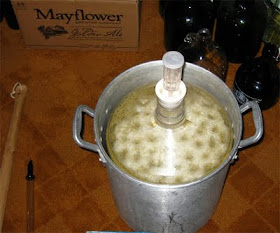 I will probably keg this one and let it naturally condition until one of the two beers on tap kicks.

Used carbon filtered DC water with 1/2 tsp of gypsum to lower the mash pH and give some sulfate for the hops. Batch Sparged.

Hops adjusted down from 3.5% AA because they are about a year old.

Collected 6 gallons of 1.043 runnings. Topped off with a gallon of water pre-boil.

Cooled to around 75. Gave 60 seconds of pure 02. Pitched a swelled smackpack of yeast because I didn't have time for a starter. Left in the basement in the mid-60s ambient.

High krausen after just 16 hours. What an aggressive yeast.

11/03/09 Added a heating pad on low to up the temp to ~75. Hopefully this will help the beer to finishing out nicely dry.

11/30/09 Racked into a keg with 4.5 oz of cane sugar.  Flushed the keg with CO2 before filling and topped off the keg afterward to ensure a good seal.